Elaine Rhodes is a character role-played by KaoruHare.

Elaine's exact background is unknown, because she changes the story pretty much every time she's asked. Anything known about her is either assumed or pieced together from things she's told people. For example, one can guess she might be from around Sandy Shores based on her accent, and someone else might note that she very likely has an ex-husband based on his reoccurring role in her stories. As to what happened to him, whether they simply divorced because of differing life goals or if Elaine's claims of having killed him are true, no one really knows. 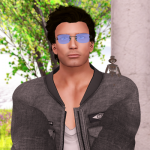