After travelling across the country, she found herself in Los Santos. Effie was reunited her brother, Maxy Mersion, who she hadn't seen in 10 years.

Maxy invited her to join his motorcycle gang, The Fallen MC (now disbanded). She is currently a mechanic for QuickFix.

Effie left the city of Los Santos on December 1st, 2020 and has not been seen since.

Effie Mersion left home when she was just 14 years old, with only a stolen credit card, fake ID, and falsified passport.

Effie, and a 17 year old boy named Asher Webb, used these items to travel to the United States. Shortly after arriving, the card was cancelled, leaving her with no money to get back home.

Effie is, like all other Mersions, tough and doesn't take shit from any one no matter who you are or what your status is. Because of this it can get her into a lot of trouble, mostly with the authority.

Though it's not like she isn't afraid of things like getting shot or being put away for a long time. She puts up a front, acting as if she doesn't care, as an intimidation towards those she's against. She does care about her life and those around her, which is why she doesn't hurt hostages she uses for her crimes. However, she wouldn't hesitate to beat someone up if she was told to do so, mostly from those she either loves, respects, or fears.

She can be pretty hot headed and swing at those who offend her or someone she cares for. In a flight or fight response, she mostly fights back. She is also very protective, mostly towards her family and her boyfriend, Michael.

She likes to fight but doesn't like getting hit in the face. 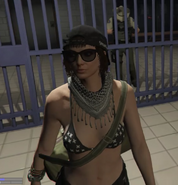