Dreah was contracted as a reporter under Weazel News, with CEO Mickey Rivers. Together they approached the PD about providing police with an outlet to release information to the public. Chief of Police Bobby Smith was pleased to have a news outlet available to the PD and was hoping to move forward with community engagement from the reporters as well.

In her trials and tribulations involved with reporting news around the city, Dreah has managed to meet several high ranking members of southside gangs. One such man would be Tyrone Biggums whom she has a tumultuous relationship with. Her innocent, ditsy and friendly nature surely helps her smooth these connections to otherwise hard hitting criminals.

In March, 2021, Dreah came into the Rooster's Rest to interview and write an article on the owners Lang, Don, & Nino and their recent success in the business. Lang was so empressed with Dreah that Lang called her up to come back to the Rooster's Rest and offered her a job as Event Coordinator. Which she accepted and has been there since. Dreah proved herself useful since day one coming up with big events. Bringing in the company more money. Soon after Dreah left her job at Weazel News to pursuit Event Coordinating at Rooster's Rest. A month or two after Dreah went MIA from the city.

In June, 2012, after a month or more, Dreah Johnson came back to Los Santos ready to work. Only to find out the Rooster's Rest was in the early stages of the Denzel Williams Mayoral campaign. Which Dreah took it upon herself to become Denzel's campaign manager. Soon after, Dreah meet the CEO of Rooster's Rest Penny Farthing. They Instantly hit it off and both realized they were both equally passionate about the Denzel Williams Mayoral campaign. Thus began the iconic campaigning duo of Penny and Dreah who campaigned every single day hours and hours. Hosting events, Going around LS to talk to civilians, and informing every single customer that came into the Rooster's Rest. It all paid off on Sunday June 13th, 2021 when Denzel Williams was declared the new Mayor of Los Santos

After Nancy Drew declined Denzel's offer to become his Deputy-Mayor. Denzel was left with little to no choice before the election of who would become his Deputy Mayor. He offered the position to both Penny and Dreah which they both accepted but with the condition if only he did not find a Deputy Mayor in time they would step up. Sunday came and Denzel had won the election making him only the 2nd ever Mayor of Los Santos after Andi Jones. Denzel and the Rooster's family went back to the restaurant right after, where Dreah came up to Denzel and firmly asked for the Deputy Mayor job which Denzel didn't hesitate to appoint her the new Deputy Mayor of Los Santos. 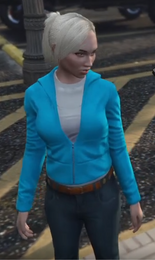