Dodo is a dodo bird owned by Randy Bullet who resurrected him in the early 2000s.

Dodo is a blue feathered Dodo bird with dark blue specks on the tip of his tail and a light blue hue at the end of his wings. His face consists of a light beige color and he adopts light brown eyes. His beak is a yellow color with black at the tip.

Dodo is often seen with Randy at races, car boosts, and in stolen cars. Dodo has insisted on driving, but Randy doesn’t think it would be a good idea. After these illegal activities, Dodo always asks for his cut, oftentimes asking for more. He likes to argue and talk badly about someone’s family members and friends if he doesn’t get his way.

On July 13th 2021, Babalu Okonkwo brought the spirit of Dodo into Los Santos via a sacrificial ritual. A women and a chicken were sacrificed in order to move the spirit of the dodo bird into the empty chicken vessel.

Randy and Dodo selfie after the successful ritual

Dodo on the back of Randy's scooter

Dodo hanging out with Boe

Dodo at his second jewelry store

Dodo on Twatter showcasing his warrant

Dodo with Randy on a podcast

Dodo at the Bay City bank with Randy 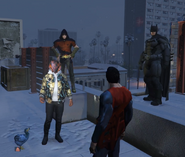 Dodo dealing with a snitch

Dodo in all his glory