Not a sexual man

Doctor Destructo is a character role-played by CrimemasterMoMo.

Self-Proclaimed Super Villain, Doctor Destructo is a cartoon-style villain that specializes in Psychological Warfare. He was made in a lab and is a cybernetic organism however his past is as much a mystery to himself as it is to others around him for he cannot recall when and where he came from or how he came into being. All he knows is that his life purpose is to paint the world in his art and villainy is his paintbrush.

Doctor Destructo is a highly egotistical being that can be incredibly insecure at times with bouts of delusions of grandeur. He believes himself to be the Greatest Super Villain in existence whether or not that is true is highly debatable.

For the most part, he is posh and well-spoken and prefers theatrics and presentation above all else. He is also very proud and does not hesitate to stand his ground when confronted. He enjoys socializing and getting to know people so he can pinpoint peoples' psychological weak spots while making connections. However he is very guarded and prefers associates over friends.

Furthermore he prefers non-violent means to get his message across and considers violence to be too simple and boring. 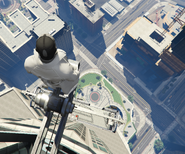 Looking down at the city

Dr. D has a bad day.
Community content is available under CC-BY-SA unless otherwise noted.
Advertisement