Dio ivanov is a character role-played by Jonthebroski

Dio has quiffed dirty blonde hair with light stubble and a moustashe. His body is covered in hair, Dio says that it makes him "manly". Dio appeared breifly after the economic collapse, and since then his buzz cut was grown out into a quiff.

Dio attended a school in Russia which is where he met Vasily Sazkaljovich, who remained his best friend through his entire childhood into adulthood. During his early adulthood, he moved to Los Santos with the aim of reuniting with Boris Ivanov. During this time, he also reunited with the Sazkaljovich family.

Dio is a hyper-aggressive and short-tempered man. In his first few hours in the city, he managed to murder a man named Chuy and committed aggravated assault on Tommy Cruizer. He is technologically illiterate and has to ask Olga Sazkaljovich help every time. He also tends to swear every sentence, using words such as fucking or motherfucker.

The Death of Leo Martinez

On the June 10th, 2021 while exiting the apartments. Dio stumbled upon Chico Guzman, and asked if he saw his uncle recently. When Chico Guzman replied that he hadn't, Dio talked about how the last time him and his uncle saw one and other was 5 months ago with Arush Patel Santana, Benji Ramos, and Leonel Martinez. Chico Guzman pulled Dio to one side and told him that Leo had unfortunately died, and he did not know who did it. Dio swore his revenge on whomever killed Leo, and when giving his phone number to Chico Guzman and asked what to put him down as Dio replied "Dio the lion". Chico Guzman then said that if Dio needed anything from the vagos that he could give them a call and that they would help. 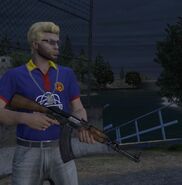