Single
Diego Márquez is a character role-played by theLGX.

Diego Márquez arrived in Los Santos attempting to find his personal enemy, Swiper. He enjoys teaching others various Spanish words, dancing,  and occasionally using his machete to put people down.

Diego is playful and upbeat, until someone asks him about his cousin, Dora. Diego has claimed that him and Dora were operatives in the jungle, on a mission to find a crystal skull. During their mission, Diego has recalled that his mortal enemy, Swiper, brutally murdered Dora, and her monkey, Boots.

Diego was sentenced to 65 months in prison for attacking police. However, the Department of Corrections officers deemed Diego as mentally unstable, after several prison fights. Judge Buck Stanton moved him to Parsons Rehabilitation Center on a temporary 51-50 hold, and has now been released. 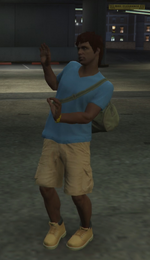 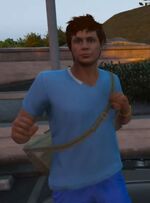 Add a photo to this gallery
Retrieved from "https://nopixel.fandom.com/wiki/Diego_Marquez?oldid=40314"
Community content is available under CC-BY-SA unless otherwise noted.