Dequarius "Big D" Johnson is a character role-played by Coolio.

Dequarius Johnson, known as "Big D", is an OG member of Chang Gang and the son of Gladys Berry. He is the co-owner and CEO of BD & BD's Bike Shop.

He is commonly seen shirtless and with a fedora atop a bicycle. Known to be very good with bicycle tricks and scuffing everything around him and known as the BMX Bike God.

Big D on a bike 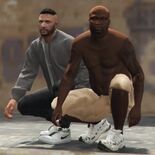 Big D and Vinny Pistone on the roof of Maldini's Pizzeria