Demi Black is a character role-played by Evee.

Demi Black is a Corporal for the Los Santos Police Department, Badge #492.

She is also a Senior Detective within the Street Crimes Unit.

Demi Black was born to wealthy parents who as a teenager sent her to a reformation style boarding school in the Midwest. The boarding school was notorious for its cruelty. Punishments would come in the form of making children kneel in stress poses to more extreme punishments like being violently tortured by the staff, which sometimes resulted in death. During this time is when Demi picked up practicing Satanism and used it as a way to cope with the horrors of her new life. She made a deal with the devil in order to escape - a pact that stayed between the two. Her wish was granted and she successfully fled at 16 years old.

She used the last of her money and fled to San Andreas, taking part in different criminal ventures to feed herself and pay her way through college.

As Demi grew older, she decided to leave her criminal past behind and focus on her future. She graduated from ULSA with honors. After graduation, Demi attended medical school and worked as a doctor at Pillbox Medical, with a focus on forensic pathology. She eventually moved on Mount Zonah Medical, working as a medical examiner.

As the years went on, Demi grew frustrated with the amount of cadavers that were brought in and left in cold storage. All the deaths ending without closure for the families that mourned for them. She decided to quit her job as a medical examiner and apply for the Unified Police Department.

As an officer, Demi has an invested interest in forensic pathology and sometimes her fascination with the macabre makes her coworkers uneasy. Demi still carries with her the trauma of her childhood and finds comfort in some of the more darker interests she took part in as a teenager, namely Demi is an observant Satanist and is fascinated with the occult.

On July 25th, 2021, she was officially hired as a police officer within the Los Santos Police Department and currently is assigned to the Street Crimes Unit as a Senior Detective.

Doug the Pug is Demi Blacks pet pug that was adopted on December 27th, 2021. Demi yet again made contact the devil on Christmas Eve in which she performed a blood ritual offering in order to adopt a pug. Her request was granted a few days later when she was given a pug from Paleto Pets. Little did she know that the pug was a powerful great Duke from Hell itself, only discovered when she offered a piece of human food to him and his form changed to reveal his true nature - the demon known as Dantalion.

Dantalion is a several thousand year old demon who was sentenced to spend 100 years as a dog by the Satanic Council as punishment for trying to overthrow Lucifer Morningstar. 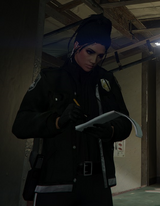 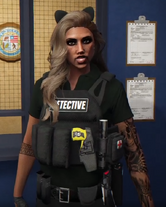 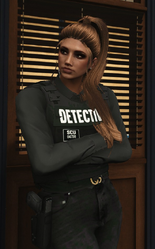