Demetrius "Draco" Jones is a character role-played by Cyter.

Demetrius Jones, who is often referred to as Draco is considered a Leader and OG to the Ballas. He took command of the gang alongside Tyrell Fresh after the blooding out of Mando Thompson. 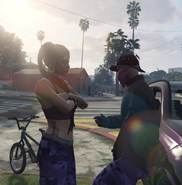