Dee Mented was a character played by charlieblossom

She was kidnapped (alongside Ivan Tickles) and killed on October 15, 2019 by Frederick “Fred” Bodini of the HOA via hatchet wounds after being kidnapped and taken to a remote location on a hill. She succumbed to her injuries after being taken to the hospital.

Zee Nanakaze discovered both Dee and Ivan outside of her Diner after the HOA were informed that Dee and Ivan were given false information by Zee who said the HOA robbed her earlier that day (it turns out they were on duty at the time and were falsely accused.)

Due to this, Siz Fulker was raided by the police for the first time on 10/25/19 when they raided both his personal residence in Mirror Park and the HOA headquarters in Vinewood. This resulted in a 355 month jail sentence and a $26,000 fine, it will be taken to court. 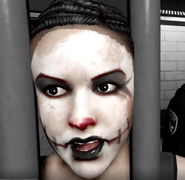