Dean Quincy is a character role-played by Deansocool.

Dean was once a long time member of NBC being pretty close to many of the gangs members, however he ended up leaving the gang after he slowly started to spend less time with the other members due to them being in the city at different times, and more time with The Mandem. After leaving NBC, Dean arrived at the Mandem block and asked if he could join The Mandem. He officially joined The Mandem on September 7, 2021 with Tommy and Moses bringing both him and Patar (who has also left NBC) in and fishing with them for their inauguration.

On September 23rd, 2021, Dean accompanied by Patar Bellosh and Moses Khan got permission and the business licence required to found his new security company Hydra Sec. This company manage to get off to a flying start with the security firms first contract being signed with Dean Watson for 2 months of security at Burger Shot.

On October 7th, 2021 after getting grilled by Odessa Pearson the deputy mayor Dean managed to found an investment company for The Mandem called Trident Investments.

On December 7th, 2021, Dean received a gun bench from Jesus's brother, Saint Joseph, after he was given multiple tasks to finish with Patar and Tommy.

On June 13th 2022, Dean made a verbal contract with Wu Chang Records, joining the record label in exchange for $250,000 up front. As part of the deal, he had to release a cover of Damien Tinkerman's cover of Paff's Chang Gang song within two weeks. Dean approached Wu Chang as part of a gambit to get a lump sum of money to fund the Mandem's gang activities. Two days later, on June 15th, he secured a job as a jeweler at the Jeweled Dragon and became an intern at Maldini's Pizzeria in the process. Dean makes 20% commission.

Dean’s first car was a Donk. He then bought his iconic olive green Sultan MK2 which was most often seen in the oxy alleys.

He used to own a Bentley Continental SS but he sold it to Ramee El-Rahman for $1.2 million. Dean is still waiting for an update on when the Rolls-Royce Wraith will be imported into the city so he can buy it.

On 22nd December, Dean's clean record broke when Tracy Martell sent him to jail for reckless driving and evading, even though he complied. He told the boys, he would not expunge after this and would shoot cops if/when pulled over on sight.

Dean on 7th December 2021, received a gun bench from Jesus's brother, Saint Joseph, at a secluded spot in the city. 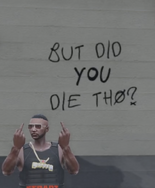 Did u die tho? 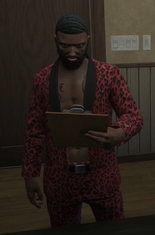 Dean in the Jeweled Dragon

Dean with Randy Bullet and Taco Prince on the Mandem Block 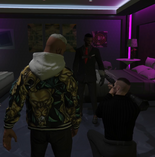 Dean with Lana Valentine and CG in Wu Chang

Dean as Token by u/Inchrono

Dean by PJ_art
Community content is available under CC-BY-SA unless otherwise noted.
Advertisement