DeAndre Flocko, more commonly known as 'Lil FLocko is a blooded-in member of The Families, and is currently at the rank of Hoodlum. He is a part of the set Chamberlain Gangster Families, within GSF.

Lil Flocko is passionate about flowers and gardening, even spending time at what he calls "flower school" in Australia. He has only recently returned to Los Santos and GSF.

Lil Flocko was exposed to gang life in the Southside of Los Santos from an early age, he grew up around GSF as his older brother Aaron Flocko and his friend Wolfgang Cole were members. When Aaron and Wolfgang left GSF, Lil Flocko was taken in by OG Lilian Mackenzie who became his adoptive mother.

After his return to Los Santos, Flocko returned to Forum Drive where he spends the majority of his time with GSF. He quickly became a prospect due to his adoptive mother Lily being on OG.

Lil Flocko showed his loyalty to the Families during his prospect phase in many ways. He participated in the war versus Brouge Street Kingz, shooting down their leader OTT and telling him that he wouldn't rob his armour because he was going to need it.

He was blooded into the Families on November 23rd, 2021 by several members, including Dexx Martin, Lavante Lamano, and Donovan King. He chose to join the set Chamberlain Gangster Families, as this was the set that OG Lily was a member of.

OG Carter Banx gave Flocko keys to his house so that he would have somewhere to live on the set. However, he stays with Shotcaller Lavante now the Carters' girlfriend Sara Nade now lives with them. 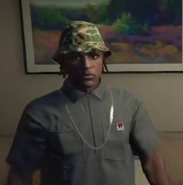 Flocko in his apartment at Alta

Sellign drugs behind the meat market