Prune Gang
Davey Doherty is a character role-played by NewFaceSuper.

Davey's early life consists of violent outbursts and petty crimes. Expelled from the closest school near him, he let education slip far from his life, causing great trouble in spelling and counting. He had found it easier to get into a brawl or steal from a store than listening to a teacher or finishing an assignment.

He had horrible parents, both mentally distraught individuals that let the house around them pile with junk.

Due to the state of the home he was growing up in, and at age 15 he chose he'd rather be homeless than stay around, dubbing himself an "alley cat" and roaming the streets of Cavan. During this time he met and joined a small gang, the "Townsend Tyrants", and became close friends with the other members, Callum McCourt, Owen Swift, Rhys Hanley, and Patryk Flood. Davey was the youngest, and became the "little brother" to most, all but Callum, who saw the boy as an asset. His life now became centered on committing small crimes for the biggest buck he could get.... until 17, when he met a woman by the name of Maeve Coldwell.

Maeve saw something in Davey, to that, he still doesn't know. The two of them became close, and she slowly tried to take him from the pathetic life he had forged. Time and time again, Davey would slip back into doing stupid things, sometimes just for the thrill, disappointing Maeve. Sadly, things would change majorly when the two were 19.

On a night like any other, Davey and Maeve were relaxing when the Gardaí arrived and took the former away on counts of murder. He tried pleading his case but, based on past lies to the police, was completely ignored, and witnesses state he had been there around the time, contrary to what he says. Maeve supported him throughout the entire endeavor, and the two worked hard to try and get him out of jail. They fought for 2 years, making plans and finding those that could help them, yet nothing was working. but at the end of the day, Davey was happy that he still had the love of his life to comfort him through his tough time.

At age 21, Maeve Coldwell slipped in the bathroom and hit her head. Being the only one home, she internally bled out.

Since her death Davey has never been the same. He was released 3 years later after new evidence came to light that put into question the authenticity of the witness statements. He left to the US, Los Santos, with the ashes of Maeve. Hoping to find the right opportunity/place to spread them, and to live a fast life in a crazy city. 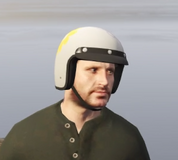 Davey's House
Add a photo to this gallery
Retrieved from "https://nopixel.fandom.com/wiki/Davey_Doherty?oldid=44138"
Community content is available under CC-BY-SA unless otherwise noted.