Chief of HOACID
Daryl Dickinson is a character role-played by VTechas.

Daryl Dickinson was a domestic terrorist, and current member of the HOA. He is a skilled shooter and is regarded as one of the best in the HOA.

Daryl started having romantic relations with Ivy Rosewood on May 12th, 2020, but they broke up weeks later. Before Ivy he used to date Jacklyn May, months after they broke up Daryl caught her whilest on patrol and was extremely violent towards her.

Sonya Summers was one of the first people that Daryl met in Los Santos. Sonya stood out, as she offered to hire him and allow him into a group when he was just starting out in the city. Daryl originally started out chopping cars, pawning items, and doing Oxy runs. He slowly started to make his way up to small armed robberies at convenience stores and gas stations, with guidance from Sonya.

From there, Daryl moved up to bank robberies. His first being with Boe Jangles, where they hit the “jackpot” during the “Fleeca Era” of Los Santos (a time where one of the most common crimes was Fleeca Bank robberies.)

The group Sonya invited Daryl into was to be named Black Betty. This is a criminal organization disguised as a legitimate business that gives resources to people. The organization generally deals with criminals and/or new people to the city, allowing them to use the resources for them to make money. During Daryl’s time with the group, he gained the most trust from the attempted, and unsuccessful, jailbreak of Sonya Summers and Gomer Colton (another Black Betty associate.)

Later in his stay, during a time where Sonya was missing, Daryl and Sean Tinker were the main voices of the group. Daryl helped Tinker purchase the office that Black Betty would go on to use as their headquarters.

The Death and Avenging of David Barker

To Daryl, David Barker was like a brother. Daryl found out that David was being charged with the murder of BCSO Senior Deputy Kurt Leonard, and would be facing life or the Death Penalty. He immediately started planning a prison break, that unfortunately never happened.

After Daryl witnessed the execution of David Barker by means of the firing squad, his life was flipped upside-down. He immediately began planning terrorist actions to exact his revenge on the PD for what they did to his friend.

His first terrorist act was the recording/editing of the execution of LSPD Officer Casey Valentine, to make it seem like he was standing in front of the very wall the police had executed David Barker. The video was released to the public, and was used to spread the message that The Gnomes were back; and that they believed that what had happened to David Barker was unjustified.

The second planned act was the kidnapping of Chief of Police Vladimir Raven, but it was foiled when the group was spotted by a member of the EMS. After a lengthy gunfight, Gomer and Daryl were downed, and Raven was still being held hostage in a clothing store on Route 68. Tinker eventually surrendered to the police to stop any further bloodshed. This situation almost led to the three of them being charged with Terrorism, but the police were unable push for it following a series of complications regarding voice recognition during a line up at MRPD.

After committing the previous terrorist attacks, Sonya, Gomer, Tinker, and Daryl were like family. However, Daryl always felt like he was pushed to the side when it came to business with the rest of them.

One day after leaving his house in Mirror Park, Daryl ran into Siz Fulker and Matt “Kray-Tor” Joe asking for a $10 HOA Fee. Daryl liked the idea of how the HOA operated, so he decided to join Siz on a few of his criminal adventures. Daryl found Siz easy to talk to, and he felt supported and understood when he opened up to Siz about David Barker’s death, and his actions following.

Following the HOA losing the "Lauren Forcer vs HOA" court case, Daryl asked to join the HOA. He also revealed that Lauren Forcer was his home decorator, and could easily be ambushed there. At this point, Daryl was forced to choose between the HOA or Black Betty. Sonya made a $50,000 bet with Daryl that beef from HOA actions would eventually leak into Black Betty, which did eventually occur due to the Ballaz.

After losing the bet to Sonya, instead of paying up, he simply told the members of Black Betty that he would be resigning, and becoming a full-time HOA member. As much as he wanted to stay neutral during the entire affair with Black Betty and HOA, there was already tension brewing between the two groups, as Sonya kept getting caught robbing houses in Vinewood. Gomer and Siz were having "family" issues with one another, and Sonya's reputation around the city (with the way that Gomer described her to Siz) wasn’t very positive. Daryl was pushing more towards the HOA even more when Siz said that it shouldn’t be anybody but Daryl’s choice. Daryl was free to choose, but Sonya didn’t give him that choice.

Even with Sonya shooting automatic firearms at the HOA, Daryl still tried to stay neutral with her. Eventually, Sonya stabbed Daryl while he was responding to a house robbery. Daryl immediately lost all respect for her, and Sonya calling Daryl a snitch was the nail in the coffin.

The HOA always tries to put Daryl in his place. Whenever the HOA find themselves in disagreement with another group, they often make the remark “Has Daryl started another war, again?” Daryl sometimes takes these comments to heart, but the leaders make sure to tell him off when he takes things too far. Most of his actions have granted him the title of ‘Chief of SBS.’

Daryl once said to Siz after giving him a machete as a gift that he “saved him from Sonya“ and has been loyal to Siz ever since, even going to the point of killing, saving or going into prison for him.

Twitter beef about past altercations between the two sides ended with Daryl leading a raid on the Black Betty Headquarters, and theft of all items stored in the office. This was met with a counter-attack, that was later revealed to have been planned even before the Black Betty Headquarters was raided. Black Betty members staged an ambush at the HOA Headquarters, opening fire on any HOA member in sight, while in Gnome attire (which offended Siz deeply.) This attack led to the HOA ambushing a mansion owned by members of Black Betty, where the HOA opened fire on any and all inside the compound.

The involved members of the HOA were eventually caught by police following this attack, and were charged accordingly. This sparked police discussion on why two groups of members of believed "legitimate organizations" were getting into gunfights with each other. Following the arrests of members of both Black Betty and the HOA, a prison brawl ensued, where Daryl was jumped by Boe and Sonya, while Sonya and Gomer berated him regarding how he had changed, and turned into a “snitch”.

His relationship with Sean Tinker is unknown at this point. According to Gomer, everything that was stolen from inside the Black Betty headquarters belonged to Tinker. He also doesn’t know how his relationships with Boe or Gomer are, as the last time they saw each other they were both shooting at one another. He would like to stay neutral with them at the least as he respects both of them.

Daryl had beef with the Lost MC, as they stole his stash car that had approximately $200,000 worth of guns, and various illegal items. He has done small attacks in retaliation, such as drive-bys, but he doesn’t think it’s enough.

Before the CID was disassembled, he gave "riddles" to members of the police department, in hopes of the Lost MC being raided. The riddles started with Deputy Lauren Forcer, but were eventually given to Assistant Chief Olivia Copper and Trooper Jackie Snow.

He has also retaliated against the Lost MC, specifically Reid Dankleaf. Daryl kidnapped and attempted an execution on Ryan Parker, Reid’s husband, and sent Reid the location and an image of Ryan’s body.

Months after their beef, they settled their differences and moved on.

HOA taking a photo beside their mural 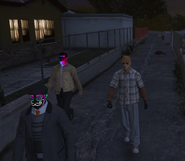