Daph Lilith is a character role-played by 666daph.

Daph is a member of Street Team. She currently sells weapons for Randy Bullet. She is also a manager at the Bullet Club and Vultur Lé Culturé.

After weeks of subtle flirting, and their feelings for each other becoming increasingly noticeable among their peers, Daph officially began dating Aleksander Sazkaljovich on April 11, 2022. Miguel Almerion and Rue West became her adoptive parents. 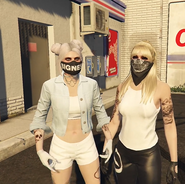 Daph with Kio Shima in the Hydra "Snake Pit" 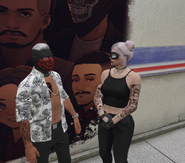 Daph and Randy Bullet in front of the CG mural 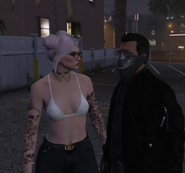 Daph and her boyfriend, Bogo