Paramedic
Daniel Rogers is a character role-played by CommandoRetro.

Daniel "Brexit" Rogers is a Doctor at Pillbox Medical Center and a former Lieutenant of the Emergency Medical Services. He cares deeply for people as he had a troubled past that he does not want to happen again.

Events Before The City[edit | edit source]

Daniel Rogers Was Born in London, England. He was in a good home with a loving family and wanted to follow his farther's footsteps to join the military. When Daniel was 18 years old he joined the military and trained in the Commandos. When he was 22 years old he was Fully trained in the Commandos as a field medic. Daniel joined his First squad at 23 years old and he got along with his team. However he fell in love with a squad member called Lydia Jensen. They worked together very well. Too well infect that they joined squads together and completed missions to the highest of degree.

When he was 26 his last squad and Lydia was throwing a party the night before the incident to celebrate a squad mates birthday. That is the night that Daniel was thinking about proposing to Lydia. The next Afternoon they went on a mission to clear out an outpost. The squad split as everyone checked lower floor of the building as Daniel checked first floor. A bomb went off and the building collapsed onto them. Daniel wakes up from the wreckage and noticed that he was trapped in the wreckage. He saw Lydia's body next to him motionless. Daniel was broken with his head and mind. An Enemy came up on him trying to end Daniel's life. He stabbed Daniel's Shoulder. Daniel grabbed Lydia's pistol and shot him dead. Daniel was rescued and after his body healed his mind was still broken. That there he was sent to Los Santos to get some help.

Some of Daniel's Friends he feels like family which are Mike Frost , Sydney Bearmont, William Thatch, Ruby Morris, Claudia Gartner and Auggie Stitzler 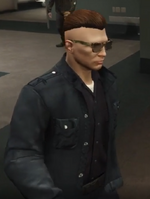 EMS
Add a photo to this gallery
Retrieved from "https://nopixel.fandom.com/wiki/Daniel_Rogers?oldid=55142"
Community content is available under CC-BY-SA unless otherwise noted.