Curtis Swoleroid, also known as the "Demon of Los Santos" and formerly the "Demon of Lean Street", is a businessman, hitman, and well known criminal in Los Santos; excelling as one of the best shooters and combat drivers. He is a former member of the Leanbois but now resides with Chang Gang and one of the three members of The Triplets.

Curtis is a heavily connected man, dealing with guns and large amounts of narcotics (formerly cocaine). He is very straightforward and will tell you how it is, but also loves to joke around and goof off when with people he trusts. He is down to do anything, from daily robberies and gang shootouts to full-blown terrorism. He is also a ladies man and a known flirt, and was often seen "macking" on women before settling down with Penny Farthing.

Curtis is the founder and owner of Swole Creations, a blacksmith company in Los Santos that produces and sells melee weapons such as knuckle dusters, switch blades, daggers, and katanas, among other items.

Curtis was raised by his uncle, Marty Swoleroid, after his father died in prison. Marty taught Curtis how to shoot, hit on girls, and some other things.[1]

Prior to joining the Leanbois, Curtis was a "gun for hire", with connections to a multitude of gangs, namely Chang Gang.

While a part of the Leanbois, he was known for wearing a demon mask while doing crime, which is how he got the Demon of Lean Street moniker. Curtis played a big part in establishing the Leanbois' presence in the south side. Curtis then left due to differences with Lang.

The Demon of Lean Street

Curtis with a Red Jacket

Curtis with Eugene after fighting the Fudge Lane Ballas

Civilian Curtis: Curtis chilling with Seaside and UwU while on bail for terrorism
Apr 2022 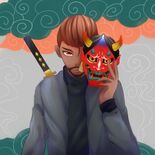 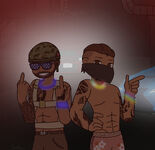