Crocodile Steve is a character role-played by Whippy.

Crocodile Steve is a Senior Officer for the Los Santos Police Department, Badge #480.

Self-described as the most petty cop in the LSPD, Steve is a hardass towards criminals, regularly taunting and mocking them, often with his megaphone. He particularly enjoys taunting the Bondi Boys MC.

Steve is obsessed with being acknowledged as one of the LSPD's elite pursuit drivers and will often pester his fellow officers and even High Command about it. However, Steve can put his money where his mouth is and excels at Trooper Soze's Interceptor Timed Trials. His fellow officers will often rip him for his driving to mess with him, but they, as well as criminals, are well-aware of how dangerous he is as a pursuer.

Steve also takes pride in his "666" badge number and will do almost anything to keep it. He went so far as to bribe Troopers Soze and Andrews before his Final Eval to ensure he retained it after promotion (which they graciously accepted). His bribes ultimately didn't work. Upon being promoted to Officer he was made to change his badge number by Trooper Jack Ripley. He switched to "480", that way when he's in pursuit he could say on "480 active 80."

Of all the gangs in Los Santos that Crocodile Steve contends with, none give him more joy in messing with than the Bondi Boys MC. He's dedicated significant time trying to take down BBMC leader Irwin Dundee, but has never gone toe-to-toe with the notorious Australian criminal personally.

When Dundee went missing after being ocean-dumped by Sam Baas, members of the club who hadn't yet met Steve tried to solicit his help in investigating their Prime Minister's disappearance. But after realizing what a hardass and petty cop he could be, the two sides quickly came to blows.

Steve frequently taunts the club by going down to their Vespucci Beach territory and taking selfies at the Billabong or by calling them "the Bondage Boys" to their faces. This has gotten him shot by just about every member of the club at least once.

Being as petty as he is, Steve has tried on numerous occasions to impound their vehicles or arrest members with active warrants while in their territory. This has also gotten him shot on multiple occasions.

Upon getting Interceptor certification, Steve began taking lead on bank robberies where members of the club had suspected involvement. This, too, has gotten him either shot or ejected from his car in crashes on multiple occasions.

As for the BBMC, they consider Crocodile Steve a top enemy of the club due to his behavior. Even the lowest-level members will shoot him on sight if close to their territory. 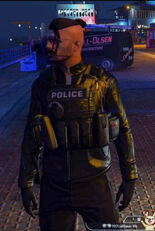 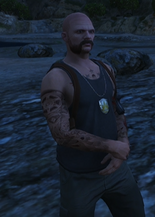