Craig "Crackhead Craig" Munson is a character role-played by SmithyFPS.

Craig is an ex Ballas member.

Blooded out of the Ballas

On the 27th of January 2022, while Craig was walking around Grove Street, 3 Ballas members: Demetrius Jones, Mona Sanchez and Dimitri Azmanov came up and told Craig they needed to talk to him. They then cuffed him and put him in their car and drove to the La Puerta docks. They ordered Craig out of the car and all 3 stood in front of him and explained what Craig did wrong. Craig was defending himself, but it wasn't helping. A few minutes later Demetrius Jones (Draco) told Craig that they're taking his flag and that he's being blooded out, Draco then tells him it was nice knowing him and that he already fucked up once and that he keeps fucking over the Ballas. Draco, Mona and Dimitri all fire at Craig even continuing to fire on him when he's down. The 3 Ballas then leave in their car. A few minute later 3 cops find him lying on the floor of the docks unconscious. They send an ambulance who takes him to the Pillbox Medical Center where Craig is hardly breathing and having a hard time staying alive. A few minutes later Craig is conscious again and laying on the medical bed. He is then taken to the ICU to stay for a couple of days.

After being forced out of the Ballas, Craig decided to accept and leave that life behind. Trying to find a new direction in his life, he was often seen with various friends and crews doing random activities. He came to a point where he felt lost and confused on what his next goal was. After some time of running with different crews, he became quickly involved and loved by the Natural Born Crackheads. Being a crackhead himself, it only made sense that the mutual respect and love for one another grew. He now solely runs and is associated with the gang. 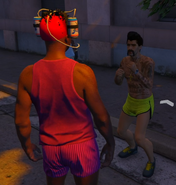 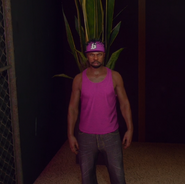 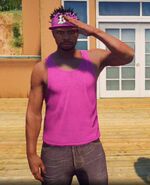