Coyote Russell is a character role-played by Judd.

Coyote Russell is a Judge with the Department of Justice. He is well known for being difficult to work with, especially by the police, who go out of their way not to get him as judge in court cases. Judge Coyote interprets the laws strictly constitutionally, sometimes to the frustrations of police officers.

Coyote used to be an attorney defending the criminals of Los Santos, butting heads with past Judge Wayne Ardson who was the DA at the time. He took Nora Dupres as his paralegal. After some time he faded away because the other lawyers started hating him when all criminals chose him for representation. He reemerged when LaBarre offered him a position as a judge.

Coyote once kicked Jose Luis Santana out of the DOJ offices for calling him "puto" repeatedly. Jose then took out his brass knuckles and assaulted Coyote only to be met with the bullets of Coyote's pistol. The next day Jose wanting revenge gunned down Coyote at the parking lot outside of the courthouse. After that Coyote constantly wears a vest. 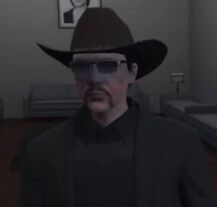 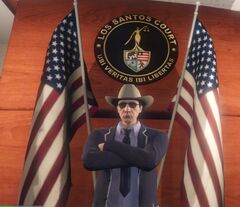