Cora Star is a character role-played by ms_star.

Cora is a street racer formerly affiliated with the Femly which included members such as Octavio "Goofy" Stenberg, Jesse Reed, Kitty Dream, Adam "AP" Peterson, Mayumi Himura, and a few others. Cora was initially introduced to Nightfall and was adopted in to the crew shortly before it was disbanded.

Cora's first day in the city she ran in to Jesse Reed and Meelo Graves outside the Alta Apts where Cora complemented Jesse's car. Meelo and Jesse noticed Cora driving a Futo around and Meelo gave Cora a lockpick to find a better car, and Jesse gave Cora his number.

Jesse and Cora became fast friends, Jesse helped Cora immensely during her first days in the city, helping her get the things needed for her to do things she wanted such as boosting and racing. Jesse and Cora ended up spending lots of time together and enjoyed each others company to the point feelings were formed. A couple days later Jesse gifted Cora a vin scratched Coquette to help her get in to races. Jesse and Cora became a couple shortly after but decided to keep it quiet during the beginning.

Cora, through Jesse, has met many Bondi Boys MC members and has gotten along with all of them. After meeting Pezz on a few occasions Pezz asked Cora if she had intentions of joining the BBMC, Cora said most likely no she will not. Jesse is very adamant about Cora not joining the BBMC, to the point he has said that she can do what she wants but if she joins the club, they will no longer be together. 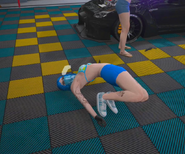 Cora not feeling too good
Community content is available under CC-BY-SA unless otherwise noted.
Advertisement