Coop Holliday is a character role-played by thaCOOP.

Coop Holliday is a charismatic man, with a depth of career experience. He can be friendly, somewhat reserved and enigmatic, or angry with an ego. He has been in the city of Los Santos for longer than almost everyone.

Coop has experience in multiple government departments; years as a Head Judge & Justice for the Department of Justice, and a short Cop career in the Los Santos Police Department.

Over several months, Coop opened up to crime due to multiple influences:

Currently Coop Holliday has experienced crime, however he has not been caught by the PD, and his next career is still to be determined. There are rumors' he may always return back to his roots as a Judge for the DoJ.

In September 2019, Coop's best friend Nino Chavez (business man) offered him a career change by working closer together, after Coop expressed his beliefs differ from the current DoJ. Coop was feeling distant and discouraged by the direction of the DoJ, however had stayed around for the prestigiousness of being a Judge.

In July 2020, after resigning as Judge for the final time, Coop accepted the offer from Nino to work together at Sahara International.

This is a slow building partnership as Nino is often out of town. The depth of this partnership is under development. Will Nino share his drug and gun ventures openly with Coop? Will Coop become more involved or return to being a Judge? A lot is yet to be seen.

Coop is well known for his exploits in his relationships. He can be charming and warm, as well as serious and hard to read at times, particularly when joking. Coop seems to value loyalty in long-standing friendships and serious relationships, and is loyal in return. Coop knows all the major civilians and criminals.

He had a "friend-with-benefits" relationship with Lauren Forcer, and used to be overheard talking about his regular hook-up adventures with various people all over Los Santos.

In 2020, Coop proposed to Carmella Corset and asked Jackie Snow to be his best man (as Nino wasn't around). Days after eloping, they divorced due to their fiery relationship, got back together, and continue to be on then off.

Along with other factors, this relationship encouraged Coop to try crime as he didn't want to hold Carmella back, and had been wanting to experience something new himself for nearly a year.

After a messy breakup causing a mid-life crisis, his crim life was pushed into overdrive.

However he heavily contemplates each criminal activity, as he does not want to jeopardize his Sahara International career with Nino.

Other connections include those formed during his Judge days, as Coop had one of the more personal relationships with the police force, compared to the other Judges. He could often be seen riding along in cop cars to get a first-person view of how the city is functioning. He was known for holding private meetings with Command/High Command members to discuss charges, the penal code, and/or the state of the relationship between the DoJ and the police force.

Coop was the youngest and first Chief Justice for the DoJ in Los Santos. He wrote the original laws and charges enforced by the Police. Late 2018, he handed over the Chief Justice position to Dennis LaBarre, supporting as a Judge.

Early 2020, the Panel of Justices was created, consisting of Coop, Labarre and Wayne Ardson. The Chief Justice position was removed. The three Justice members in the Panel have since changed over time.

On June 8 2020, Coop handed in his notice, stepping down as a Judge, stating in a city announcement that his passion for the Judicial system had come to an end.

He left a legacy of being a "fair" Judge, however towards the end of his career had a running joke of never taking a case. Coop is the only person to officially have a law named after him - Coop's Law.

Coop becoming a cop first started as joke between himself, Jackie Snow (pictured) and Olivia Copper. This joke eventually became a short-lived reality.

On February 8, 2020, Coop left his role as Justice, and became a Cadet for the Los Santos Police Department, Badge #556.

On March 13, 2020, Coop resigned from the LSPD and returned to the DoJ as a Judge, stating the DoJ needed him back to help run the city.

However his career restlessness continued, and a few months later he again stepped down from the DoJ to pursue new beginnings.

Coop retained his Police training, and ever since has carried a gun to protect himself and his loved ones. He takes this knowledge into his next career.

In January 2020, Coop handed the Vanilla Unicorn key to Slim on behalf of Nino (50% owner).

As time passed, Coop mentioned to Slim he could step in to help run the VU if Slim wasn't interested, given Coop's close relationship with Nino.

In March 2020, Slim became less involved in the VU and brought in Mother, Payne, then Speedy to assist. 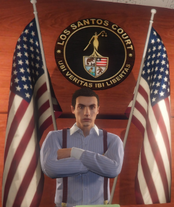 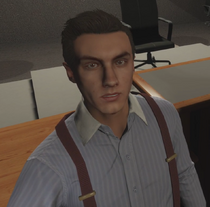 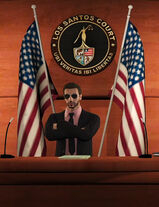 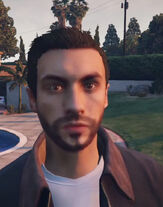 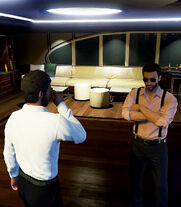 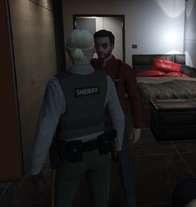 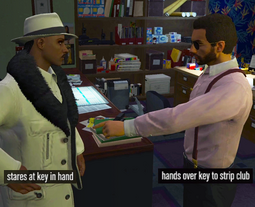 Coop hands VU key to Slim on behalf of Nino 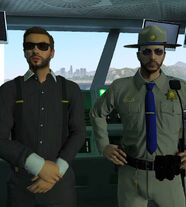 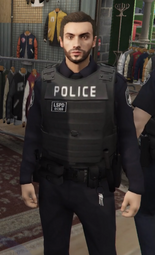 Cop Coop in a vest 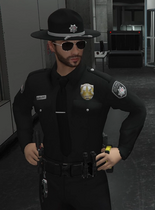 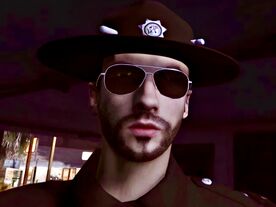 Coop when he was a cop 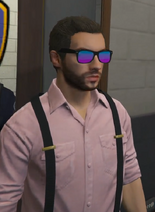 One of Coop's unique sunglasses 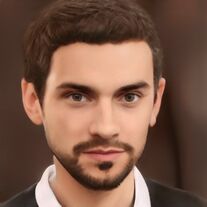 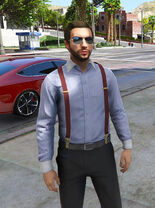 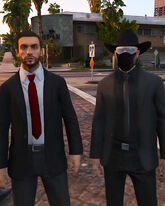 Coop with Dennis on his last day 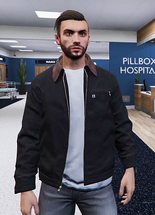 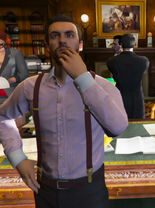 Coop in his Judge Chambers 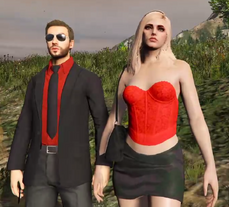 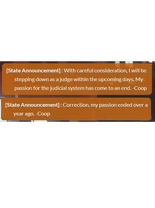 Coop steps down from Judge 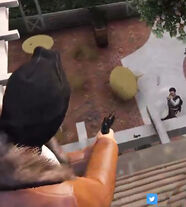 Coop shoots at Soze during his first Bank Truck with CG 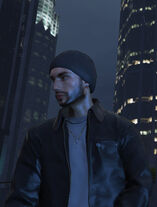