Colt Shepherd is a Senior Deputy for the Blaine County Sheriff's Office, Badge #321.

Shepherd graduated from Academy in 2018, and gained the rank of Deputy. He quickly rose the rank to Senior Deputy and then Corporal, gaining the opportunity to help train his fellow officers as a Field Training Officer. After the major police department restructure in early 2019, Shepherd retained his FTO status, but again assumed the role of Senior Deputy.

He still hopes to be named to a Command position one day. To this end, he has convinced Sheriff Travis Tribble to name him the Assistant to the Assistant's Assistant Sheriff. Shepherd seems to think this is third in command.

Shepherd was born and raised in Mission, Texas. His father was an abusive alcoholic who was in and out of his life. His mother was a stern, religious woman who ushered her son into seminary school hoping that the call of service to the Lord would help her son stay away from the evils that plagued his father. Colt still espouses extreme religious views, but after a dream in which he heard the voice of god telling him he had a different mission, he began police work in Arizona where he met his wife and started a family. Things took a dark turn after his wife was killed, the circumstances of which are still unclear. Colt then moved to San Andreas and applied to join the BCSO. 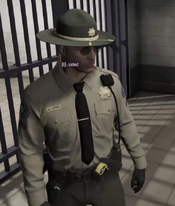 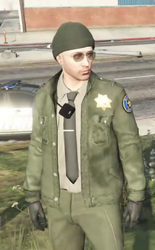 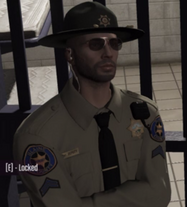 BCSO Long Sleeves w/ Hat
Add a photo to this gallery
Retrieved from "https://nopixel.fandom.com/wiki/Colt_Shepherd?oldid=45789"
Community content is available under CC-BY-SA unless otherwise noted.