Cletus Cornwood is a character role-played by EsfandTV.

Cletus Cornwood is a Senior deputy for the Paleto Bay Sheriff's Office, Badge #316.

In his college years, Cletus "Longway" Cornwood attended East Texas Baptist University where he played American football and ran a sub 5 second 40 yard dash. Cornwood was an amazing athlete with a shining future. He could've gone pro, but destiny had different plans for him.

He was the sheriff of the L8PD back in Rust Island. He was the best sheriff that they ever had. With his partners Chief Mizkif and Officer Spaceboy, they protected the island with their lives and kept it safe as much as they could.

After a long time serving the country, not only as a sheriff but also stationed in Berlin during Desert Storm back in the 90's, he decided to take a rest and retire. Searching for a different life after a divorce from his wife Shelley, he moved to Los Santos but his soul asks for justice and he knows he is the law.

As of March 3rd, Cornwood has came out from his retirement and resumed to his former (self-appointed) position as Sheriff Cletus Cornwood by joining the Blaine County Sheriff's Office.

On April 17th 2021 he was promoted to Captain alongside Randy Wrangler, with Kyle Pred being appointed as sheriff.

On July 16th 2021 he was demoted to Lieutenant by Pred due to his inactivity.

Tony Andrews: Andrews is the officer that Cornwood rides with the most, and through this they have slowly bonded with one another. Andrews was originally very weary of Cornwood, but as Cornwood spent more time working with the San Andreas State Police, Andrews has grown to appreciate Cornwood's company, but not his driving skills. Whenever Cornwood finishes riding with Kael Soze, Andrews will often tell Cornwood to "forget everything Soze taught you."

Sam Baas: Another officer that Cornwood often rides with, Baas often gives Cornwood more freedom to use Cornwood's 20 years of expertise, but this has lead Baas and Cornwood into trouble with higher ranking officers on a few occasions.

Hedi Saurus: Saurus has saved Cornwood's life on numerous occasions. She will always refer to Cornwood as "Baby Cadet".

THE BEST GTA RP CHARACTER... THE RETURN OF CLETUS CORNWOOD

SHERIFF CORNWOOD COMING OUT OF RETIREMENT?

Cornwood Chronicles Ep. 2 - The One He Gets His Call Sign

04/27/21 - The PD pose for a photo as they prepare for Cornwood's first raid against Fritz "El Chapo" Ericson; afterwards 49 bottles of Oxy were discovered in Fritz's apartment 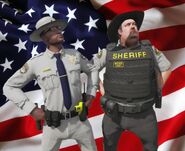 Cornwood and Andrews, brothers in arms

Cornwood and Andrews on their Simpsons cameo