The ocean and all the creatures that live there

Clara Mellow was born and raised in the small country town of Wee Waa, NSW. She has two older siblings; Faye (31) and Marshall (28). Her parents, John and Marie raised the three of them and also looked after Clara's grandmother, Bronwyn "Brownie" Mellow later in Clara's life. Growing up, Clara felt disconnected and misunderstood by her family. She struggled to keep focus during classes at school, was often forgetful and impulsive and generally struggled with being in the classroom, or inside at all. This was very different from her siblings, and her parents were very open with their disappointment.

As a result, Clara grew resent school and her family along with it. She very quickly started being rebellious, and began detaching herself from her family more and more. At around age 12, she attacked an older man who tried to touch her by stabbing him through his hand. This basically started a 5 year streak of criminal activity, some charges taking her to juvenile detention.

At the age of 17, Bronwyn was finally able to step in and intervene after moving to town, and helped Clara break away from the people she had fallen in with, and start rebuilding. Clara spent the first chunk of this unwell, recovering from addiction and injuries, but eventually got back on her feet. Brownie taught Clara how to bake as a way to occupy her time and keep her busy, which Clara liked because it involved moving a lot, and following a set list of instructions while also leaving room for creative freedom. Eventually Clara decided that she wanted to bake cakes and pastries professionally, so Brownie helped her go to Melbourne to study.

During her studies, Brownie passed away, leaving a good sum of money and some heirlooms in Clara's possession. Shortly after that, Clara met Niamh, another aspiring chef, and the two began dating. After 5 years of studying and being in this toxic relationship, Clara finally had enough. She decided to cut her family out of her life, leave Niamh and move as far away from them as she could possibly go , and to a place they wouldn't follow - Los Santos. 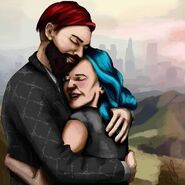 Painting commissioned for Clara by Ryan, by @medusa_artist on twitter
Community content is available under CC-BY-SA unless otherwise noted.
Advertisement