Christopher Talken was a character role-played by Burn.

"Come with me, i will give you a lovely Cowbell..."
― Christopher Talken

Christopher Talken was a vicious serial killer cannibal and a kidnapper who ran a cult alongside his "brother", Christopher Stalken, called The World of Walkens. Christopher would abduct people off the streets of Los Santos to interrogate them regarding their opinions on chicken pot pie and cowbells. If the victim had responded unfavorably to both, they would take to them to their family ranch and attempt to murder him or just remove a slice of the victim's back fat to use as an ingredient in the chicken pot pie. Christopher also stock his victims bodys in his ranch to slaughter later and put a cowbell in them neck to replace Betsey, his dead cow.

When Christopher came back to town he quickly prepared himself to start the murders and the genocide against the people who dont like chicken pot pie, he bought a knife and headed towards his mother's house ("Grandma"), on the way he met Abdul AlRahim on the road waiting for a taxi, he hid and started playing his cowbell to calls him, Christopher invited Abdul to go to his ranch get his cowbell too. Unfortunately when they went to get in the taxi, another one appeared and called Abdul then Christopher and Ricky Rouse went to Christopher Mom's House for Ricky get his "cowbell". Christopher stabbed him twice in the basement but he ran away while bleeding.

After the assassination attempt Christopher started making calls to find his next victim, during the calls he found out about a Hide and Seek event and went participate, there he meet Bryce Miller, next victim. After making him lose the competition on purpose, Christopther told that he would make up with a gift tooking him to his mother's house. Christopher tried to kill him in the basement but Bryce suspected it so Chrstopher took him to meet Betsey in his barn but couldn't murder him again, so he invited him to tooke a slice of chicken pot pie in the kitchen, Bryce realized Christopher had an axe and ran away before he was murdered. Christopher tried to convince him again but he didn't believe and left so Christopher called Shelly and offered to teach her son Moses, to how work on the farm.

Christopher took Moses to his ranch and taught a little about how to work on the farm, after they took a break to eat his delicious Chicken pot pie. Christopher served Moses and took him to meet Betsy, while Moses was distracted Christopher attacked him with an axe and putting him in the barn with a bell around his neck. Christopher called Shelly telling her Moses had an accident that Betsy attacked him, he said to her come to his house help his son and would leave another Chicken pot pie ready for them. Christopher took Moses body to the basement to wait for Shelly for also put a cowbell in her neck but the Police showed up stopping his plans and arresting him.

Leaving the prison Christopher meet with his Comrade Chritopher Stalken in the apartments and they agreed to start their massacre in the name of Cowbell.

Another day comes, Christopher meet with Douglas and Christopher Stalken, and started to ask people if they like Chicken Pot Pie and cowbells; not finding anyone that didn't like it, they left near the apartments before they get caught, which didn't help too much because minutes later they ended up being chased by 3 police officers, they managed to escape miraculously and meet in the apartments again, they meet with Raymond and interrogated him but fortunately he passed in the test. They went to the Burguer shot trying to get food but they encountered with Moses and almost had troubles there, then they leave to get food in another place, Christopher found in the yellow pages Nicholas Reyes, a Novelist and called him to write down their crazy history. 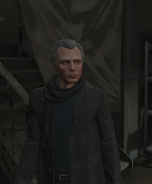 Christopher in the Basement 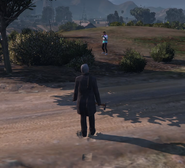 Christopher about to make a new cow

Moses facing Christopher after the incident