Chriss Angel is a character role-played by Kyle.

Chriss Angel is the twin brother of Brittany Angel.

Chriss first arrived in Los Santos on January 16th, 2021, looking to enlist the help of his sister in filming his up-and-coming Netflix special, which involved fighting crime with his "powers" as a magician.

Chriss seems to specialize in illusions and sleight of hand, his main acts are focused around making objects vanish, making them seemingly appear out of nowhere, or translocating personal belonging from one's person to another location. One of the biggest acts he has performed thus far was jumping from the roof of a ten-story high building, vanishing in the middle of the air, and reappearing in a different location.

Chriss is a 30-year-old caucasion male with long white hair and green eyes, his hair is pulled back into a low ponytail. Chriss can mainly be seen wearing a black jacket, no shirt, tight jeans, and black cowboy boots. He wears smoky black eye liner and eye shadow, and a sizable silver chain necklace.

Chriss and Brittany at the gas station 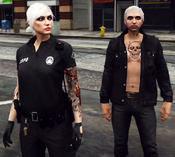 Chriss and Brittany at MRPD