In a relationship with Uchiha Jones

Red
Choi Zhangsun is a character role-played by Choi.

Choi is a doctor at Pillbox Medical Center. She has a mix of Chinese and Irish blood which gives her red hair that she leaves in a low bun, and green eyes.

On duty, Choi is usually seen in her doctors attire which consists of a regular woman's doctors coat, a light blue button up shirt, dark slacks, grey converse shoes, and a new pair of blue latex gloves. When working with an injured Uchiha, she often pulls out a pair of black goggles.

Choi was born in Hong Kong to a Chinese father and an Irish mother. As a child, Choi was brutally bullied for being red-haired, despite being native, and her family moved to the US when she was five (though the move was due to her father's job).

Choi grew up fairly normally, in a New England town, and when she graduated high school she decided to enter the Army, where after basic she was assigned to protect a medical unit. Her unit was attacked one day and Choi was captured by insurgents and tortured, leaving hideous scars on her back that she continues to hide. She never wears clothing that reveals her back.

When rescued from the POW camp she was imprisoned in, Choi went on a rampage and slit the throats of her tormentors. She still has dreams about this, though due to being in very poor shape when she was finally freed, she doesn't remember it. Not clearly.

After recovering from her wounds, Choi tried joining the police force in her hometown, however, she was grievously wounded not long after being made a full member, rendering her unable to bear children. She gave up the idea of protecting people with guns after that, and decided to become a doctor instead, and began medical school, deciding on a neurology specialization.

After having to help/repair Uchiha multiple times outside of the hospital, either due to him being stranded or involved in illegal activities, the most recent of which Uchiha was dressed as an officer of the SBSO, Choi brought up the idea of having a code word for next time he needs help but cant be treated at Pillbox: Phoenix Downtown. In the case that Uchiha says the code word, Choi has an incognito outfit, is purchasing fake plates and possibly a less flashy car so that she isn't recognized when treating off-site.

Choi contacted Raja Bahadur to get medical equipment and a secure location for doctor work. She now uses QuickFix's old Parts Shop locations for Phoenix calls. Choi also picked up a mechanic job to fill the extra time she has while off duty since there were so many new doctors hired.

"You're just a dumb dok-tor!" - Uchiha, nearly every time he's injured at the hospital. Choi and Uchiha had a very good friendship as many of their conversations holding friendly banter and self cucking from Uchiha's side. Choi, having a soft spot for Uchiha, has offered many times to help him whenever she could whether it was from detective work or something else.

Whenever Choi was on duty, Uchiha has been seen loitering around the hospital more than anyone else in the city; whenever she wasn't in the city or at work, he's almost never to be seen around the area, this has been stated and observed by Brenda Pancake. When confronted about it, Uchiha merely said that she was 'dope.' When being treated while injured, Uchiha has always suggested seeing Choi rather than the "fake Choi" when referring to Tracy Martell.

Over the course of a few months, the two had become closer, however, with Choi already being in a relationship with Dennis LaBarre at the time, the two continued to be friends despite knowing that there was something was going on between them. Choi had later realized that she was developing feelings for Uchiha, and planned to break it off with Dennis.

Two days after she broke up with LaBarre, people around the city had assumed that Choi had ended the relationship to be with Uchiha, but despite these rumors neither really denied this fact.

Despite being "unofficially official", they never once talked about their relationship confusing Choi whether or not they were together. When asked by Chang, she told him that she didn't know despite Uchiha going around saying that 'she's my main hoe' or that they were in a open relationship.

On one of their dates, the pair went to the beach, and for the first time Choi had smoked a little bit of weed with Uchiha at the beach. Later they went to the hospital after Uchiha had lied that he was injured, in need of medical help, and passed out in the water.

Before the verdict for Uchiha Jones v. The People for the murder of Tony Tiger, Uchiha gave a USB of his memory and personality up until that point to Choi and Eugene just in case he was sentenced to death.

Recently, there has been progression between the two:

Choi was formerly engaged to Dennis.

When Dennis sold Choi's car as a joke, she was upset at him only to be to move out of the house as well. Choi felt like their relationship was beginning to drift apart when she found herself spending more time with Uchiha. After she later discovered that she had feelings for Uchiha, she decided to end things off with LaBarre because she didn't want to be in a active relationship with someone where she had feelings for someone else.

When Choi told Dennis that she wanted a break, LaBarre was positively open towards this -  however, despite the agreement, a few moments after leaving his office, he sent out a tweet that only had a broken heart on it. Choi had said earlier that even though he agreed to a mutual break, he would never let it go.

There is a sense of tense animosity between the two ever since Choi shot him up in prison.

Upon meeting each other for the first time, Choi was attempting to treat a downed officer at the Bolingbroke Penitentiary when the cell the policeman was in was in Bovice's. Worried, Choi pulled out her gun, and pointed it towards Bovice then demanded, multiple times, to move away from him. When Bovice refused to, she shot him down.

Because of this action, Choi was suspended from her doctors work for some time.

When Bovice was broken out from prison with the help of Mr. Wang Chang, Iroquois "Snake" Plisken, and Uchiha Jones (who, at the time, wasn't close with Choi,) he had planned to take revenge on her, however, that didn't happen  because when Al Saab (who's close with Choi) heard about it, he convinced Bovice to think otherwise. However, she still suspects that he is still after her.

Before kidnapping Choi, it was unsure whether or not the two had a actual friendship as they had regular conversations, and often roasted each other.

After forcing to sew Uchiha's arms and legs unto Ricky, it had been stated that Choi developed PTSD because of it. This had been proven true when Ricky sued Choi after she had punched him the moment Choi saw him at the hospital, despite being on medication. When Uchiha heard about this, he met up with Ricky and told him to drop the case. Even though Ricky agreed to do it, he didn't.

Choi went to the court case against her and won without any charges. If given the chance to ever get Uchiha's arms and legs back, Choi would personally detach them herself.

These two are described to be very close to one another, and are regularly seen to be hanging out together at the hospital.

When discussing about Uchiha and Choi's feelings towards him, Brenda called him to test out his loyalty towards Choi. He had passed with flying colors when he dismissed to 'being in love with her.'

Her trusted friend and coworker they get along well and often gossip at the hospital.

These two are also very close to one another and Saab consider her as a sister figure. Choi also gives Saab advice whenever he needs it.

Choi once helped Otto with his medical needs and they have a working relationship.

Uchiha Jones and Choi at the beach 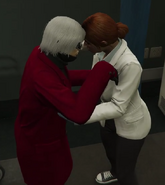 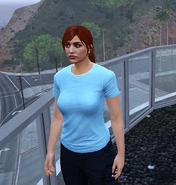 Uchiha and Uchoiha
Add a photo to this gallery
Retrieved from "https://nopixel.fandom.com/wiki/Choi_Zhangsun?oldid=32302"
Community content is available under CC-BY-SA unless otherwise noted.