Chloé Blanc is a character role-played by ChloeLock.

Chloé Blanc is a confident and straight speaking person. Her sophisticated look along with her French accent she is hard to miss and is often a conversation starter. Often wearing white to match her last name meaning white her look is definitely recognisable throughout the city. Chloé likes to get along with everyone she meets and develop caring and authentic relationships. When she gets to know a person more her personality is little more sassy and loves to take part in roasting others and giving a little attitude.

Chloé Blanc grew up in the north of France with her mother (French) and father (English) before they decided to move to Paris where her parents owned a bakery selling the iconic pastries. After many arguments and disagreements her mother decided to leave and left Chloé and her dad which led them moving to England which improved Chloe's English tremendously but she refused to lose her mothers accent. She knew that she wouldn't just jump into a relationship with anyone as she knows what its like to see 2 people not love each other anymore so she takes it slow to know if someone is the one. Chloé grew up moving to different cities and countries and knew when she was old enough she wanted to move somewhere where she could thrive and meet amazing people. So here she is in the city of Los Santos.

In the first couple of day of moving into the city Chloé was definitely surprised being held at gun point for the hood tax right outside her apartment definitely made her realise she needed to toughen up living in the City. She met a lot of people in her first days which made her feel very welcome in the city. She complimented a bike she saw on the pier with around 100000 mirrors the lady who owned the bike was called Sherry Paie who happened to be in a management position at Burger Shot. This led Chloé to volunteering when they needed staff and was happy to help whenever she could.

After doing small jobs and volunteering at the Burger Shot Chloé was able to afford a small car, driving the new car into the parking lot she nearly ran over this man who she shouted at for running across the road. This happened to be the manager at the Gallery who twatted her to come to an interview. After a very nerve racking interview Chloé was hired by a man called Mario who soon introduced himself as Fernando "Mario" Reyes which seemed to have a thing for the French ladies or that's what his colleagues seemed to say. 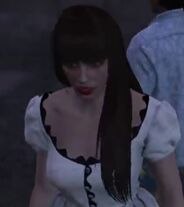 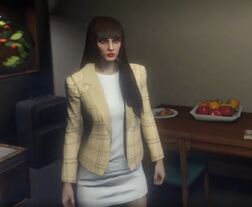 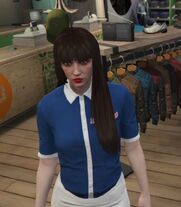 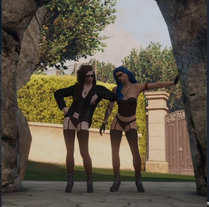 Chloé and Cece posing together at the Playboy Mansion 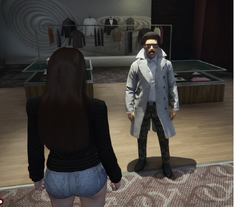 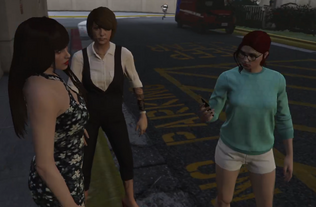 Chloé with Sherry and Ash 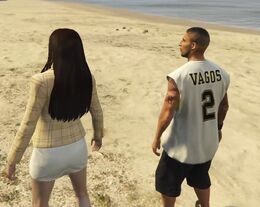 Chloé hanging out with Raymundo