Red
Chips Ahoy is a character role played by NotoriousNorman.

Seen around Los Santos often slouched and in need of crack, Chips "Crack" Ahoy (First name Twelve Piece Extra Crispy but soon changed to Chips) is easily spotted in a safety yellow jacket. After messing with a box of red hair dye, Chips fires up the locals and finds himself in undesirable circumstances.

A nervous crack addict with a bad back. Distinguishable by his lime green raincoat and scarlet red hair. He's recently been adopted by the Steele family, who consists of a psychotic ex-stripper lawyer, an aggressive parking attendant with drug issues, and apparently an "overweight" singer who enjoys having sex for drugs. The family is highly dysfunctional, though due to Chips being a drug addict, he seems to happily frolic behind them when called for and tags along for the family's abusive antics.

Chips regularly drives around in his rusty van, making deals and doing jobs in order to acquire more crack for his "fix."

Jordan Steele, otherwise referred to as "Papa Steele" by Chips, is his adopted father. Better yet, from the lies being fed to Chips, he now believes Jordan is his biological father and that he's an albino with a brother named Bovice. Which is why you can occasionally catch Chips running around with an umbrella or paper bag in order to protect his skin from the sunlight.

Jordan is very manipulative and is sometimes verbally abusive towards Chips. When given the opportunity, he will steal his son's crack stash, claim to be "flushing it down the toilet" when in actuality he's simply keeping it for himself. Oddly enough, he is also very defensive over his son, and will even defend him and tries helping out with his drug addiction.

Kayden, otherwise known as "mom" is one of Chips's adoptive mothers. Like Jordan, she's very protective over her son, despite the constant lies she tends to feed him in order to keep their family together. She's shown to defend him against Jordan, and has occasionally threatened to take Chips into her custody if they ever got a divorce.

Out of all the family, Kayden seems to be the most abusive. While not physically attacking Chips, she has on more than one occasion started torturing Jordan until he's willing to relent, and manipulates both Chips and Jean constantly into her favor.

Jean, otherwise referred to as "mum" is the nicest one out of the family. She's shown to be supportive of helping Chips through his addiction, though the recent "footage" of her selling crack to Chips in exchange for sex has damaged her relationship with both Kayden and Jordan. Jean was also the one that snitch on Chips, which nearly gave him life in prison for having a mountain full of crack.

Saab is Chip's adoptive uncle. While not being related, Saab still treats him like a nephew (possibly more of a son than just a nephew). Whenever Chips is in trouble, Saab tries to be there to support him no matter what the situation is. At one point, Saab tries to stop Chips from smoking crack but unfortunately, it didn't go so well. Eventually, Saab understands why Chip loves crack and tries to accept him for what he is (although Saab gets pissed at times whenever Chips does something stupid).

Brenda is Chip's adoptive aunt. Along with Al Saab, she's not related to Chips but still treats him like a nephew. She also tries to be there whenever Chips needs help. Brenda also tries to stop Chips from doing crack, but she's a little more aggressive about it than Saab. There were a couple of times when Brenda had to handcuff Chips in order to make him stop doing crack. Eventually, Brenda tires to be more understanding although she's not entirely thrilled about it.

Chips met Ricky while searching for crack in the Southside near Lean St. Ricky took an interest in Chips and sometimes uses him for tasks. Chips also helps Ricky and Denzel run the gas station on occasion. 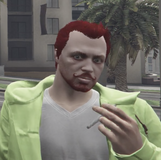 Add a photo to this gallery
Retrieved from "https://nopixel.fandom.com/wiki/Chips_Ahoy?oldid=21203"
Community content is available under CC-BY-SA unless otherwise noted.
Gaming: New Releases New in Entertainment Lifestyle: Travel