Seen around Los Santos often slouched and in need of crack, Chips "Crack" Ahoy (First name Twelve Piece Extra Crispy but soon changed to Chips) is easily spotted in a safety yellow jacket. After messing with a box of red hair dye, Chips fires up the locals and finds himself in undesirable circumstances.

A nervous crack addict with a bad back. Distinguishable by his lime green raincoat and scarlet red hair. He's recently been adopted by the Steele family, who consists of a psychotic ex-stripper lawyer, an aggressive parking attendant with drug issues, and apparently an "overweight" singer who enjoys having sex for drugs. The family is highly dysfunctional, though due to Chips being a drug addict, he seems to happily frolic behind them when called for and tags along for the family's abusive antics.

Chips regularly drives around in his rusty van, making deals and doing jobs in order to acquire more crack for his "fix."

Chips is a known crack addict. His family Jordan Steele, Jean Steele, and Kayden Steele tried to help him and force him to quit the habit to no avail. Chips is often enabled by criminals in the city such as Eugene, Siz, Vinnie and Mr. Chang. Chips also loves Ellie Dono because she always sold him crack, and he fondly calls her the "Crack Fairy."

Chips has a drug stash in his home which once held over $500K worth of crack and cocaine. He endearingly named his stash the "Crack Mountain" and he would snort a line and run around his house high. He was so proud of his stash of drugs that he often showed it to guest. He showed it to his mom Jean who then told police.

Chips was then busted/raided by police and his own papa Officer Jordan Steele and his mountain was seized as evidence. Chips became known as "El Chipo" and holds the record for biggest drug bust in the city. Since he got busted, he's been trying to collect more crack and coke to rebuild his mountain.

Chips was in need a new kidney due to his years of drug abuse. Ricky wanted to help and earn some extra money. He agreed to pay Leslie Ling $500 (of Leslie's own money) plus an additional $20 for his kidney. Melbert Rickenbacker would perform a kidney transplant in an abandoned repair shop. Leslie and Chips nearly died but now Chips has a new HIV infected kidney thanks to Ricky and Mel. While at the hospital, Ling revealed to Chips that he planned to give him HIV all along in retaliation for what Chips' mother did to him.

After contracting HIV Chips went to Pillbox Medical Center to seek treatment. His hair was malding, his skin was turning red, and he feared he was dying. Chips underwent a drastic body swap surgery by Dr. Agnes Ranbough. Chips brain was transplanted into the brain-dead body of Nettie Machete's grandmother who donated her body to science. The transplant was a success and Chips became grandma Chips. He plans to use his female body until Agnes finds a way to rid his old body of the infection. Now a woman, he changed his name to Clits Ahoy and tries to adjust to his feminine body and emotions.

Clits noticed Dr. Agnes Ranbough across from the hospital, and she approached her. She informed Clits that her male body was cured of HIV. Agnes also informed Clits that she may taste metallic flavors in her mouth for some time after surgery. They went to the barbershop where Agnes kept the body because her morgue was removed from the hospital. Agnes then transplanted Clits' brain back into her male body. Clits became his old self again and Chips Ahoy was back. Members of The Families gang were also in the barbershop during the transplant, and they gave Chips some crack to celebrate.

Jordan Steele, otherwise referred to as "Papa Steele" by Chips, is his adopted father. Better yet, from the lies being fed to Chips, he now believes Jordan is his biological father and that he's an albino with a brother named Bovice. Which is why you can occasionally catch Chips running around with an umbrella or paper bag in order to protect his skin from the sunlight.

Jordan is very manipulative and is sometimes verbally abusive towards Chips. When given the opportunity, he will steal his son's crack stash, claim to be "flushing it down the toilet" when in actuality he's simply keeping it for himself. Oddly enough, he is also very defensive over his son, and will even defend him and tries helping out with his drug addiction.

Kayden, otherwise known as "mom" was one of Chips's adoptive mothers. Like Jordan, she's very protective over her son, despite the constant lies she tends to feed him in order to keep their family together. She's shown to defend him against Jordan, and has occasionally threatened to take Chips into her custody if they ever got a divorce. Kayden died February 15th, 2020, Chips went to visit her body and told her he would still find scraps of food for her and left her flowers and a bag of crack.

Out of all the family, Kayden seems to be the most abusive. While not physically attacking Chips, she has on more than one occasion started torturing Jordan until he was willing to relent, and manipulates both Chips and Jean constantly into her favor.

Jean, otherwise referred to as "mum" is the nicest one out of the family. She's shown to be supportive of helping Chips through his addiction, though the recent "footage" of her selling crack to Chips in exchange for sex has damaged her relationship with both Kayden and Jordan. Jean was also the one that snitched on Chips, which nearly gave him life in prison for having a mountain full of crack.

Deandre, better known as "DJ" was a member of the GSF gang is the biological son of Chip's father Jordan Steele. Chips was informed by Jordan that DJ is his stepbrother. DJ is also one of Chip's crack dealers, they instantly bonded and DJ even helped him escape custody. DJ died while running from police on March 28th, 2020.

Saab is Chip's adoptive uncle. While not being related, Saab still treats him like a nephew (possibly more of a son than just a nephew). Whenever Chips is in trouble, Saab tries to be there to support him no matter what the situation is. At one point, Saab tried to stop Chips from smoking crack but unfortunately, it didn't go so well. Eventually, Saab understood why Chips loves crack and tried to accept him for what he is (although Saab got pissed at times whenever Chips did something stupid).

Brenda is Chip's adoptive aunt. Along with Al Saab, she's not related to Chips but still treats him like a nephew. She also tries to be there whenever Chips needs help. Brenda also tries to stop Chips from doing crack, but she's a little more aggressive about it than Saab. There were a couple of times when Brenda had to handcuff Chips in order to make him stop doing crack. Eventually, Brenda tires to be more understanding although she's not entirely thrilled about it.

Chips met Ricky while searching for crack in the Southside near Lean street. Ricky took an interest in Chips and sometimes uses him for tasks. Chips also helps Ricky and Denzel run the gas station on occasion. Ricky also helped Chips get a new kidney which happen to be infected with HIV.

Dr. Ranbough helped Chips after he contracted HIV. She offered to cleanse his infected body of the disease. However, she had to transplant Chip's brain into the brain of a clean body during the process. She used the body of Nettie's brain-dead grandmother and Chips became Clits Ahoy. Once Chip's male body was cleansed of HIV, Agnes transplanted his brain back into his old body.

Chips attracts lots of attention from men with his new female body. One of the men that approached Chips for sexual favors was Lang Buddha. Buddha was so taken by "Clits" that he wanted to get engaged to her. Clit's mom Kayden was furious and told Lang to stay away from her daughter Clits.

Nettie is currently engaged to Jordan and is Chips' soon-to-be stepmother. Despite not yet being married to Jordan, Nettie takes care of Chips as if she were his mother by frequently packing his lunches, paying his rent, and enrolling him on her insurance as a dependent. Although, she would later tell Jordan that enrolling Chips on her insurance was just a lie to give him peace of mind. Nettie was originally in denial about Chips' age and thought he was still in high school when she became engaged to Jordan, she's since come to terms with him being older than her.

Due to her nature as an enabler, Nettie often makes puns regarding Chips' addiction to crack and refuses to get him in trouble for possessing it.

Chips and Julio used to be next door neighbors and are very good friends. Chips introduced Julio to Siz Fulker and since then Julio is now in the HOA. All three of them did some bank jobs together and Siz helped them both learn about what number the cards are and how to rob the bank, with Chips usually dressing up as a Snowman.

Julio makes sure to warn people not to give Chips Meth, as Julio has seen first hand how much of a monster Chips becomes whilest on it. 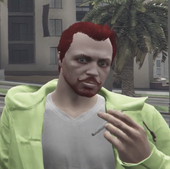 Chips with his crack pipe

Kayden informs Chips he is her and Jordan's long lost son

Kayden tells Chips its natural to be attracted to her

Jordan sends Chips to work in the coal mines

Chips gets a lapdance from Jean

Chips sniffs coke off of Erin

Chips ask Jean to hug him with her legs

Kayden pretends to be a ghost and haunts Chips 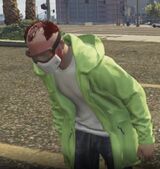 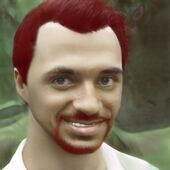 Chips in “A Peek into NoPixel” trailer

Chips in “A Peek into NoPixel” trailer #2