Bodean Tucker †
Chet Manley is a character role-played by Pons.

Chet Manley is an Officer for the Los Santos Police Department, Badge #421.

He was previously working as a Civilian Dispatcher for the LSPD.

Chet's former PD and romantic partner was killed during a traffic stop, causing him to resign from his position as an officer.

After a year and a half, Chet decided to rejoin law enforcement work and joined the LSPD as a civilian dispatcher and eventually was hired as a Cadet. On his first day as a Cadet, he became the "Assistant to the transitional NA Sergeant, Brittany Angel." 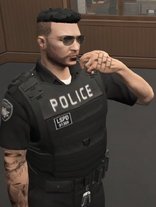 Black Short Sleeves + Vest Uniform
Add a photo to this gallery
Retrieved from "https://nopixel.fandom.com/wiki/Chet_Manley?oldid=62121"
Community content is available under CC-BY-SA unless otherwise noted.