Penta
Chase Clouter is a character role-played by Penta.

Chase "The Package" Clouter is a 150-year old (at least according to his birth certificate), Jewish, homosexual, former-Olympic marathon swimmer. He's more homosexual than he is Jewish. He claims he's from several cities; thus far he's claimed he's from Vice City, Liberty City, Seattle, Boston, a nondescript city in Texas, eh, ah, the city of AAAHHHHH, " ", errbbbeggeerrr, and miami liberty city. He has a daughter that he is willing to commit crime for, but he can't see his daughter because he did too much crime back home. He wants to leave crime behind but first he must do one last job. He's also willing to do whatever it takes to get his daughter back, even if it means killing cops.

Chase needed a taxi and decided to ask Tessa Lamb for a ride in her car. He accidentally broke her window and apologized, making sure she understood he did not want a war between the gay Jews and lesbian taxi cab drivers. He offered her one favor unless she wanted to rob a bank or needed a pickup. She agreed and asked him to pick up litter if he saw any on the street.

Chase then created the OG3 by recruiting whichever mentsh would accept his offer to pull off one last job. He attempted to elude police following the incident, but was apprehended.

Later in the day, he had a duel at MRPD against shmendrik Cadet Francis J Francer. Francis lost the duel and Chase threatened to hit him again with a flashlight. Francis then ordered other officers to shoot Chase, and he was shot multiple times by police. Chase was still reaching and was shot again, luckily he was shot in his vest and survived the shooting. After being revived, Chase convinced cadet Domenic Toretti to release him with no charges by being too obnoxious and troublesome to deal with.

Needing to pull off one last job, Chase picked up a new crew, a hostage, and an obviously defective voice changer. After robbing a convenience store, Chase attempted a water escape. This lead to the creation of "The Vice City Special".

It is currently unclear at this time if the Vice City Special includes further diving and climbing in the event the officer is not yet killed.

Later, Chase picked up a homeless man and stole an EMS ambulance. He needed to do one last job, so he robbed a convenience store with at least six hostages then forced the cops to count to 15 in sequence. He also asked Toretti to perform "Fiddler on the Roof" with Officer Scarlett Winters. Toretti then proceeded to "fiddle" Winters on the roof of the ambulance. Chase escaped with his crew of random strangers and went to another convenience store to rob those robbers. In the chaos Chase joined the robbers who were actually members of Aztecas. Chase escaped police custody during a bench trial and Aztecas arrived to save him, despite previously kvetching about his interference and asking police to remove him from their getaway car. A shootout occurred and Chase hid atop a silo until he made a random call and was rescued by a shikse named Windsong.

On the run, Chase attempted to assemble a crew for one last job. Calling on the city's chosen people, Chase was soon lured into an ambush by Toretti, who was pretending to be a fellow Jew by dressing as if he were incredibly wealthy. As if sensing foul play, Chase questioned "Monopoly Man" Toretti and soon discovered he believed in Hell. Since devout followers of Judaism do not believe in such a place, Chase quickly drove away and attempted a water escape. Chase was apprehended, but then demanded a bench trial and escaped. Unfortunately, his would-be getaway driver was a meshuggenah shlemiel that panicked on a level never before seen in the history of car chases, repeatedly crashing into several stationary objects.

Though Chase may have been defeated following the first and second escape, he retained his chutzpah and escaped yet again. This time, by jumping into the Lamborghini of one Mel Rickenbacker during one of many trials. Mel expressed that he was carrying "a PD arsenal" and the two escaped police pursuit together.

With a burning desire to pull off one last job, Chase enlisted the help of Pogg Dann, an Uber driver and beer peddler. Promising a big fake score of $500,000 from a high-stakes backroom Poker game in a convenience store, Chase assembled a crew and set to work. During the robbery, Chase forced Officer Sam Baas to lick the motorcycle seat of fellow officer Lance Malton. Chase then married Pogg and demanded spike strips before coming up with the revolutionary idea of attempting a water escape.

Upon being apprehended in the water, Chase began insisting he should be let go because it would be funny. He made several escape attempts on foot, only to be thwarted by locked doors, and summarily demanded a bench trial. Before said bench trial, Chase called a delivery driver and scheduled a pick-up for an undisclosed package. Upon running from the court room, Chase jumped into the delivery truck and revealed that he had actually been the package the whole time. After once again attempting to pull off "The Vice City Special" maneuver, Chase was soon apprehended, was shot several times, and was admitted to the ICU for cranial air leakage. Vehicles submerged: Pogg's uber car, semi truck, delivery van, multiple police vehicles.

After a miraculous, unseen escape from the ICU, Chase apparently decided to buy a new yarmulke. After leaving the clothing store, he was chased by police and decided to pull off a water escape. After assembling a new crew dubbed "The Moses Rollers", he was almost immediately apprehended by officers AJ Hunter and Brian Knight. Knight allegedly stabbed him with an AIDS-infected knife and declared that he thought AIDS was funny. Chase was processed in the Police Chief's office in accordance with his preferences.

In prison, Chase met another prisoner and attempted to start a riot. The attempt was thwarted by both the prisoner and DoC officer Lydia Vale who then proceeded to referee several death matches between the two prisoners. Chase was "victorious" and "won" a thousand dollars. Upon leaving prison, Chase met up with Windsong once more and she provided him with some materials necessary to pull off one last job. Before the job could begin, he heard a door bell, fell through the surface of the planet, and was unjustly handcuffed in mid-air along with the entire shrieking population of Los Santos. This may have been the result of questioning whether or not Jesus was truly the son of God and demonstrating that anyone could walk on water.

After a brief police chase during which he insisted his car was actually off, Chase did something unheard of and attempted a water escape. Unfortunately for Chase, the scuba-police were on duty. He was soon punched, tased, handcuffed, and drowned into submission due to having a gun in his hand. What Police officers didn't know, however, was that Chase had previously witnessed a box jellyfish in the water and was attempting to protect them. Luckily, Chase was resuscitated by the cast of Baywatch.

After impressing the arresting officer with his knowledge of pineapple law, Chase was processed despite the complaint that it wasn't any fun. The amount of prison time was reduced from 20 to 19 months due to Chase pulling an imaginary gun on the officer. Chase then wandered silently around the empty prison for the duration of his sentence before going home to dream up his next big job.

Chase met up with two random schlemiels, Carmella Corset and Lana Valentine, and asked them to do one last job with him. After briefly being sidetracked by a quest for Spanish ass, the group set out to find a hostage, a bank card, and a lock pick. The prospective hostage shot at them, the bank card expired immediately after it was received, and the lock pick was taken by the girls as they ran away.

The girls were, of course, arbitrarily adopted by Chase and Pogg moments before fleeing.

After meeting back up with his new daughters and police, Chase lead a low-speed pursuit. He then climbed a crane high above the city and shot at police when he was referred to as a "little fuckin' meatball". Chase was quickly downed in a hail of gunfire, and was carried to safety by a disappointingly female EMS. At Mission Row, Chase was easily able to convince trooper Kael Soze to release him without charges by doing a Marge Simpson impression. Chase then climbed another building and wandered in circles before kicking the glass out of a bus stop and falling asleep. 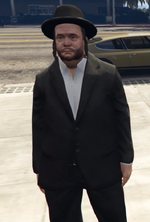 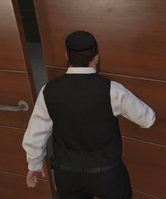 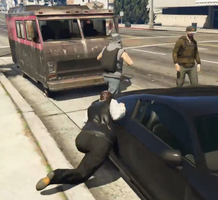 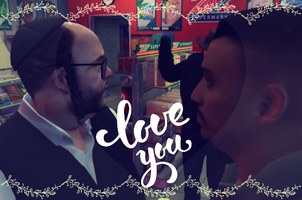 Chase, loving.
Add a photo to this gallery

Retrieved from "https://nopixel.fandom.com/wiki/Chase_Clouter?oldid=106073"
Community content is available under CC-BY-SA unless otherwise noted.