Charlie Greene is a character role-played by Sun_Bae_.

Charlie moved to Los Santos to get away from the traumas of her past and search for her long lost father who doesn't know she exist. Charlie lost her younger brother, Dax, who was hit by a drunk driver that fled the scene. Charlie also thought about starting an event planning business when she threw a birthday party for her frenemy, Nora Koh.

After finding her half-sister, Whisper Hale, they discovered that their Dad passed away some years ago. Before Whisper moved to the city, she lost a lot of her memory about her past life. Charlie and Whisper attempted to find her missing memories to find some answers for her. Charlie struggles with abandonment issues from her parents not being to involved in her life. Her father never knew about her, yet her mother was an alcoholic and avid drug user who was very abusive to her and her brother growing up. After Charlie's brother died, she became her mother's primary target for emotional and physical abuse. Growing up, Charlie never talked to anyone about this abuse that she received and still hasn't opened up to anyone about it. Because of this, she has poor coping skills and turns to alcohol herself and struggles to open up to her closest friends and partners.

Charlie was one of the co-owners of A Light In The Dark until she got overwhelmed with running the business in feeling like she was the only one trying to make the business work. She walked away from ALITD and took Sam's offer to join the Cereal Villa team. Sam made her this offer after spending time together at the markets and Charlie expressed her feelings of feeling alone on the team. Charlie decided to become co-owner of Cereal Villa by signing a contract, and often makes the joke that this is the only thing she'll ever marry.

Charlie currently struggles with an alcohol addiction. She has struggled with alcoholism after moving to the city. She mainly drinks to cope with her feelings rather than talking about them. She is actively trying to become better about talking about her feelings and using healthy coping mechanisms but it doesn't always work out. Longest time sober has been 20 days. She hopes to use Parks & Rec to create an AA program in the city for those who struggle with addiction, not just alcohol addiction. This idea first came from having her "crane talks" with her friend, Veronica Westfield, who also struggles with Alcohol. They have made chips to signify their progression.

In May 2022 at the encouragement of Rocky Topps, Charlie reached out to Mayor Bunny to squash their beef from Bahama Mamas West and to shoot her shot as Director of the newly revived Parks and Recreation department. Assisted by Niki Reynolds and a newly hired team of supervisors and recreation coordinators, Charlie ran several successful Parks & Rec events for the city such as "Friendly Feud Fridays". Charlie convinced Bunny to promote Niki to Assistant Director.

During day 3 of a Cerberus internship competition on July 5, 2022, contestant Charlie was teamed with de facto Gulag Gang leader Marty Banks, Sparky Kane, Dougie Fresh, and Max in a challenge where four teams start with a radio and go around the city trading up to the most prestigious item possible. Charlie openly dissented against Marty's usage of the radio to call in a friend for help, and once the team was disqualified for a rule break Lang Buddha eliminated everyone on the team except for Charlie. Marty swore revenge.

A week later in a Cerberus meeting on July 11, 2022, Samuel Dennis and Charlie pitched their Cereal Villa business to Lang, Dean Watson, and Dillon Dubbs. They agreed that Cerberus could own 50% of the business in exchange for a $500,000 investment and help with a storefront. Also, the first cereal box must have Cerberus branding. The next day on the day 4 finals of the Cerberus internship competition, Marty ocean dumped Charlie before the start of Marlo Stanfield's trivia game show and Marty's girlfriend Elena Vega ended up winning the Cerberus internship. When Lang confronted Marty why he had ocean dumped Charlie, he answered "she deserved it". Although Lang dropped the subject and went gambling with him, Cerberus ultimately decided to hire Charlie as an intern in addition to Elena. The new head of the Cerberus Intern Program, Dillon, delivered the internship orientation at the Cerberus Business Center on July 25, 2022--where Vice President of Operations Nancy Drew specifically brought up Lang's #1 rule to keep gang politics out of the workplace.

Charlie and Niki in a tense standoff with the Mayor Mickey S administration on June 16, 2022

Charlie and the Parks & Rec team organizing the 4th of July Extravaganza on July 4, 2022 at Vespucci Beach

Charlie, Nancy Drew, and Finn Milton judging the trash-talking boxing tournament at the 4th of July Extravaganza on July 4, 2022 in the Vespucci Beach ring

Director Charlie at a Parks and Recreation meeting on August 7, 2022 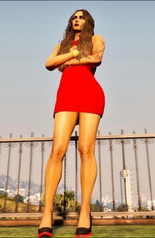 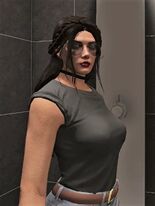