Charli Woods is a character role-played by cynbubs.

Charlotte "Charli" Woods is a loveable criminal. She is a glass half full kind of person, and often believes things will go well. When things go wrong, she tends to bury those thoughts and let people believe she is still optomistic. She is a prospect for Mortelle and spends her time trying to become tougher, and stronger.

She tries to let people know her name is spelt with an I, but still finds herself frustrated that people will spell it "Charley, Charly or Charlie".

Charli is known by her pink hair, and colourful revealing outfits.

Charli Woods was born March 1st, 1996. She grew up in a broken family, in the lower income area of Toronto. She faced alot of hardships growing up, as her father left before she was born, and her mother was constantly working herself into a depression, never being around. She raised her little brother Mac, and always feels that she let him down as he went down the wrong path himself, as she became obsessed with pleasing her first love in his fundamental development years. She's had bad luck in love, as she has a very impressionable heart and is taken advantage of way too easily. She has become very hard to please when it comes to dating, and still has a weakness for men who are similar to her ex. She fled to San Andreas with her Mother and Brother after her toxic relationship ended with her ex boyfriend, Joseph. After living in a small city a few hours from Los Santos, she decided it was time to move there, focus on her future and move up in the world.

Charli had been wandering aimlessly, trying to find her place in Los Santos. She had gotten herself a job at UwU Café and made some friends doing so. This is where she met Cindy Tipton. Cindy told her she was the leader of Mortelle, an all girl gang, and Charli was intrigued right away. She was still new to the city, with not much criminal experience yet, and Cindy offered to show her the ropes sometime. Charli didn't want to embarrass herself infront of Cindy, so she started to do crimes more often with her UWU Cafe friends, mostly Leon "Monkey" Kent. After a few weeks of here and there conversation with Cindy and other girls from Mortelle, Charli started to be more persistant in talking to Cindy, and shortly after was asked if she was interested in hanging around.

After a few weeks hanging around, Charli was persistant with her dedication. She held her pain in, and showed a strong exterior to the other hangarounds in Mortelle during war with Royal Mafia, and kept the strength going even after betrayal. Cindy noticed this, and Charli was then promoted to promoted to prospect. Charli now spends her time in Mortelle guiding other hangarounds, recruiting and learning what it takes to be a true member of the gang.

Cindy Tipton was going to be away from the city for a week, and with the threat of war on the rise, she decided to get a lot of things to hand to the prospects to use and make money to buy more. She gave it to Charli to disperse amongst the other prospects, contents including: 16 boxes of weed, 3 brownings, 2 molotovs, 2 grenades, bank tools, hacking tool, tracker disabler, lots of dirty money and a small supply of Oxy. Charli went to bed soon after storing all these things in her apartment and Glendale, and when waking up the next day, she decided she would start small and push some of the baggies she had left of her own supply at the Pink Cage. She had 2 potential hangarounds as her lookouts, and after putting 99 bags in the dumpster she started to push the 14 bags she had on her. When on her last bag, she asked for clearance and was given clearence, so she pushed, and almost immediatly 5 cops rolled into the Pink Cage, trapping her in. They surrounded her and placed her into cuffs fairly quickly, and went straight for the dumpster Charli had been storing things in, finding the 99 bags. The officers connected the strain to Charli, and had probable cause as she was standing near the dumpster. After telling lawyers all she had, and being told by officers and lawyers she had a 97% chance of being raided, she decided to make a deal with the officers to consent to a raid as long as she didn't get drug trafficking. After being raided, she was charged with the following: Possession of Contraband in the Third Degree, Posession of Dirty Money in the First Degree, Felony Obstruction of Justice, Misdemeanor Posessesion of Controlled Dangerous Substance OXY / Meth, Sale of Drugs, Felony Possession with intent to Distribute, 3x Criminal Posession of a Firearm (Class 1), 2x Possession of Explosives, Resisting Arrest, 2x Posession of a Molotov, Misdemeaner Possession of Thermite Charge(s), and Stockpiling. Resulting in 566 months in prison, and a fine of $167,000.00. 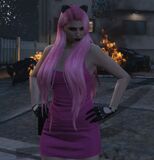 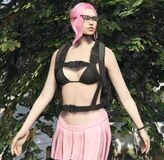 Charli after getting promoted to Prospect in Mortelle with Cara Lynn, Mami Ko, Mai Kazowski, and Tsuki Oppaimanko.

Charli being interrogated by Bubbles Smith and Sebastian Reynolds during war with Royal Mafia.

Charlis first mugshot, got caught during a D Boost.

Charli, and Mai Kazowski torturing Anthony Ricci with a bat for "cheating" on Mai.