Charles Lee "Chucky" Ray was a character role-played by dwjft.

Chucky is a doll that is known to carry a machete and an Uzi with him, described as the perfect example of a psychopath. He appeared in the city on the 20th October, 2021 and disappeared soon after. During his time in the city Chucky hung around his father, Harry Brown and listened to his every demand. 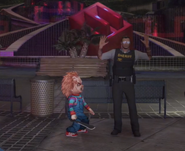