Charles Johnson is a character role-played by summit1g.

Charles Johnson is a core member of Chang Gang, joining the gang in mid 2019. He is commonly referred to as "Chawa" due to Mr. K's inability to pronounce his real name, Charles. This nickname stuck and is now used by the majority of people who know him.

Chawa is a lover of cars and keen street racer, who is willing to race anyone at any time. While pursuing the dream of becoming the greatest getaway driver that ever lived, he has gained the nickname of "Crash Johnson".

Often picking up the role of a getaway driver in bank robberies, Charles's style of escape is unmistakable. Unlike most, he loves long chases and rarely uses plans that involve switching of vehicles. He is able to outlast the police, usually waiting for them to be the first to mess up or run out of gas.

He is also an accomplished Blackjack player, with Mr. K calling him "the Father of the table".

He is known to leave Los Santos and travel on long sea cruises or going to lay low in Russia for extended periods of time.

Charles was first introduced to Chang Gang through his friend Boe Jangles. After their first meeting, he began to quickly associate himself with the gang and would roll with them learning the in's and out's of the city. He became an official member in the Spring of 2019, when he was given the keys to the CG mansion by Vinny Pistone.

Lately Charles has found a passion for cars and street racing, which he does most of the time when he's in the city. But when Charles is not racing, he can usually be found participating in heists with Chang Gang and is often their designated getaway driver. 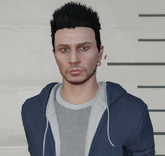 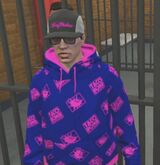