Marshall Gustavsen
Chad Brodie is a character role-played by Meatwrist.

Chad Brodie, known publicly as "Chodie", is a full member of Chang Gang and is heavily involved in many of their illegal activities, particularly marijuana. He is a former member of the East Side Ballas and has work experience as a mechanic and tow truck operator.

Donning a typical "drug rug" or a dirty hoodie, along with his shaggy appearance and goofy banter, Chad is often mistaken as a lighthearted stoner simply spreading positive vibes to citizens of Los Santos. Beneath the outward appearance, however, lies a sound business acumen and a killer's mindset.

Chad grew up on the outskirts of the South Side, but spent a great deal of his youth catching waves on Vespucci Beach to avoid strife in South Los Santos.

In his mid-twenties, a surfing accident left Chad in a coma for 6 months, thus leading to the development of late onset vertigo from the head trauma. No longer being able to surf or swim well, Chad redirected his life goals to marijuana horticulture. He stands out as a cultivator due to his proprietary organic compound of nutrients, unmatched by any grower in Los Santos.

Chad considers himself as the Chang Gang "Gardener", typically being responsible for the supply of Marijuana and joints that he provides to members of Chang Gang for free. Chad is very close to Wayne Biggz and Anthony Murphy, and worked very closely with them during their Marijuana operations.

Jack Cortair - Jack, being one of the first people Chad met in the city when joining ESB, naturally is one of Chodie's best friends. The two clicked fast and have great chemistry when working together. Jack and Chodie have raced together, evaded police together, shot people on one-another's behalf, and even won Day 5 of Sun Moon's Million Dollar Adventure.

Salem Barghouthi - Salem was hired by the Eastside Ballas as the Regional Manager of the Grove Street Gas Station. During his tenure, he befriended Chodie who was running security detail at the gas station. The two have backed each other up on multiple occasions. In addition, Chad paid $10,000 for Salem's first attempt at gaining his green card with Paris Dior through marriage.

Dunn Robinson - One of Chad's closest confidants and also former ESB. Dunn and Chad were next-door neighbors during the ESB era on Covenant Avenue after moving from Fudge Ln. The two have done everything from reverse rob people together, to compete in talent shows alongside each other.

Bobby Brown - Toward the end of ESB, having known of each other for quite some time, Bobby Brown and Chad began spending time together when the city seemed to be at a lull. Participating in events together, and drifting around the city avoiding Jupiter Addams "flakey skin", the two formed a strong bond. As time went on, Chodie continued to gain Bobby's trust, and was tasked with selling 5 jars of his patented Cocoa Butter. Bobby then welcomed him to Chocolate Incorporated as his Public Relations Liaison and Sales Lead.

Sun Moon - After ESB, Chodie sought to expand his growing capacity tenfold and spend immense effort to increase his business connections across the city. In a serendipitous encounter, Sun Moon and Chad ran into each other and discussed working together on a growing operation. Sun Moon, having helped ESB in the past, had already gained Chad's trust and the two began work immediately. Moon provided keys to his Eclipse Towers suite and the entire space was turned into a massive marijuana grow-op. While the two worked with each other on this endeavor, they also planned a large scale event that would pit two of the most notorious gangs in the city against each other at Gentry Manor. The two continue to work hand-in-hand with multiple groups across the city to this day.

Novah Walker - Novah has known Chad longer than most people in the city. Since Fudge Ln, they've had each other's backs across countless jobs and gang-related conflicts. The two have helped each other with internal conflicts as well in times of confusion or anger and continue to be outlets for each other. Novah, having developed trust in Chodie, provided keys to her house when ESB moved from Fudge Ln to Grove St. During the events that took place during the downfall of ESB, Chad expressed resentment with Novah for not confiding in him about her wishes to leave, and betraying members of her then-gang. The two eventually came to terms with past events and moved forward, and have even spent time with each other both doing jobs and taking part in helicopter flight training.

Ray Mond - Shortly after returning to the city in February 2022, Ray began forging new friendships and connections within Chang Gang, with Chodie being one of those first new connections. As Ray had aspirations in making her own money through various activities such as selling weed, Chodie and Ray connected, with Chodie introducing her to the city's underground weed world and teaching her how to sell weed on the street corner. This resulted in Chodie and Ray hanging out more and forming a friendship, with Ray seeing Chodie as a mentor of sorts, often asking him for help and advice.

Chodie after a bong hit

Chodie with Mr. Kebun during a weed grow-op at the Playboy Mansion

Judd and ESB hanging out after a long day in the city.

Chodie and his Faction 2 Custom.

First ever Vulture-Thon at Mega Mall. 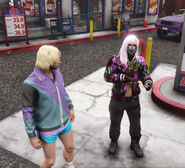 Chodie and Olivia at Grove Gas.

Chodie, next to his first car (given to him by Tyrone Biggums)

Chodie and Viper after fighting GSF.
Community content is available under CC-BY-SA unless otherwise noted.
Advertisement