The trio originally started when Lang Buddha wanted to buy his Bentley from Premium Deluxe Motorsport. Dean Watson was in this meeting between Leslie Lingberg and Lang, when Lang offered up 15% of his Rooster's Ranch business to Leslie for a partial payment on the car. Dean was interested so they countered with more money for a higher percentage of the company (at 25%) which Lang accepted. This was the start of "Hydra" , the original name for the group, which also initially included Ramee El-Rahman. Hydra-In Greek mythology the Hydra was a three headed serpent-like monster.

Early June 2021 Lang suggested the name "Cerberus" as the new investment group name. In Greek mythology, Cerberus was a three-headed dog that guarded the entrance of the Underworld. 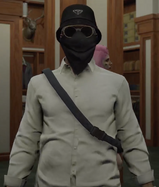