Life Of The ParTEE

Cece Beyond was a character role-played by Torrynz.

Cece Beyond is hard-to-get female that doesn’t get persuaded easily. It takes time for her to open up or even agree to doing some of the most dangerous things, however, she isn’t afraid to try her best. She is always used to being alone and never relies on support as all of the ones she looked up to, ended up leaving her one way or another. Her dad left when Cece was at the age of 7 because he didn’t want to spend money on a kid he disliked. Her mom died when she was 15 from a car accident. These two events make it hard for Cece to venture out for love and even find friends as she is terrified to lose them within so little time. In today’s world Cece can think, provide, and financially support herself and even others when needed. No matter what it takes to get it done. She doesn’t like to wait for the littlest of things.

Cece gets easily paranoid when something isn’t right, or even if her friends go missing for a long amount of time as it brings back her past. She despises being reminded of the past, but it seems like people always test her and try to get to her. With that being said, Cece is a very loving person. She constantly checks in on her friends, even late at night, to make sure they are doing alright. If she finds out something is wrong, she will do everything she can do to make sure they are safe and free. Even if that means she has to turn to the evil side. Luckily Cece knows her boundaries and does have fun. She loves to party and celebrate! That’s why she dresses like a hooker at times. She wants to let loose and have fun with the flow. She’s a party animal. Her best intentions are to always surround herself with the people she loves but tries to not get so attached as she’s afraid she could lose someone in a split of a second.

Why Cece has Love & Trust issues.

Growing up Cece always looked up to her mom since she was the only parent around (Her father left when she was 7, so of course no father figure). Cece was only 15 when her mother died in a car accident. That day broke her as the only person she was close with has left her in so little time. From that day she kept to herself and never really opened up. She felt like if she ever told someone something personal, they would end up leaving/dying. Which brought in the trust issues. Every friend she has had in high school usually stabbed her in the back by telling everyone her secrets. She felt as if the only person she could ever love & trust, was herself.

After moving to Los Santos she met Dr. Noah Drake. Who at first seemed like a nice guy. He flirted with her & she did the same back. He brought her on a date, then completely left her in the dark. Never wanted to hang out, or was taking other girls out on dates too. Which in the end, Cece just decided to be friends with Noah and didn't talk to him since.

After a month or 2, She liked JJ. He has this charm that she did adore and wanted to be around him more. Cece thought JJ was different and was possibly someone who could help her trust people again and learn to love people. Well, it's true, however, After days/weeks of not even talking Cece felt alone. One of her fears came true and it was losing JJ.

After JJ was in the ICU, Cece felt something she never felt before since her mom passed. Cece truly cared for JJ, however, to Cece it never felt like JJ ever did. So Cece decided it was best to call things off and just be friends. She didn't want to go for something if it never felt like something was there. JJ will always hold a special place in her heart and is someone she can trust truly, but it will take a long time for that to happen. From Drake & JJ alone Cece has felt like she's been played. When Oswald asked Cece out, she was hesitant at first but was open to the idea. Cece wanted to give love one last try, and if Oswald does break her heart... Cece will lock her heart and keep it closed. After being vulnerable to too many guys, something needs to change and this is her promise to herself. She constantly says this to herself "Your heart is glass. Everyone can easily break it. Only you can prevent that." She does hope Oswald will finally be that someone to treat her right if everything does work out.

The Death Of Cece.

2 Days prior to her death, Cece had been admitted into the ICU after an incident with members of Chang Gang. While at UWU Café, Cece was accused of "twatting" something out about the 'Pussies' still being alive, when it was infact her boss, Sherry Paie that had twatted it out. Due to this confusion, Cece was shot in the head by a Chang Gang member and spent hours in ICU receiving intensive surgery that caused memory loss, most notably: people, relationships and jobs.

In the late hours of December 6th 2021, Cece had made her way to the Tuner Shop with Taylor Briggs. Unfortunately for her, just minutes after she had entered the shop Mr Kebun, leader of Chang Gang, threw a Sticky Bomb into the shop. Cece was hit in the blast and instantly fell to the floor, the world turning dark. When EMS arrived on scene, they rushed to Cece's side and discovered that her vitals were almost none-existent. Despite immediate care and Cece being rushed to Pillbox Medical- the status of her vitals did not improve. While in the ICU, she was declared deceased by Doctors. Her sister, Ash Ketchup at her side. 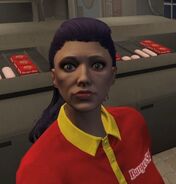 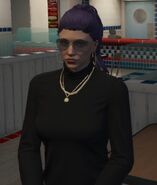 Cece's Outfit In Prison for Manslaughter 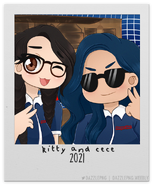 Kitty Dream & Cece Beyond drawing
made by DazzlePNG