Cassie is very friendly and outgoing. She is infatuated with Matthew Payne and has stalked him on several occasions. She was also sent to Parsons Rehabilitation Center on a temporary 51-50 hold for assaulting a police officer.

Cassie formed an all-girl gang called the SBS Angels, alongside Claire Seducer, Griselda Ambrose, and Violet van Housen. The gang was eventually renamed to the Angels.

On March 4th, 2020 Cassie forced Domenic Toretti to marry her at gunpoint with Eugene Zuckerberg presiding over the wedding. 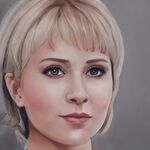 Add a photo to this gallery
Retrieved from "https://nopixel.fandom.com/wiki/Cassie_Cupcakes?oldid=56681"
Community content is available under CC-BY-SA unless otherwise noted.