Cassie Cupcake is a character role-played by Ashlynn.

Cassie Cupcake is a founding member of the Angels. A self-described "ruthless" businesswoman, Cassie will do what is necessary to succeed in business and is willing to manipulate others if needed. That said, she has very little monetary incentive and is instead motivated by creating opportunities for others, offering out contracts and investments to multiple Los Santos businesses.

Cassie is also known for being weird, awkward and even crazy, often saying things to make situations as uncomfortable as possible.

Cassie is currently the Chief Executive Officer of Burger Shot and the Diamond Casino and Resort. Cassie worked her way up from personal assistant and was promoted on the merit of her in-depth spreadsheeting, her constant promotional work and her general hardworking attitude.

As CEO of the Casino she has mostly focused on organizing events to help boost dwindling customer numbers and fixing their budgeting problems.

As CEO of Burger Shot she has inherited a chaotic nightmare of a workforce in the wake of Kevin Whipaloo's absence. Countless internal drama, court cases, murders and alien conspiracies have plagued the small fast food restaurant. Despite this, Cassie has shown she truly cares about her employees and during her tenure she has focused on building a healthy work environment instead of maximizing sales.

Claire and Violet are fellow founders of the Angels. The group's growth together has made their friendship incredibly tight and Cassie sees them as her sisters.

Dean is the owner of Burger Shot and the Diamond Casino and Resort. Cassie is incredibly loyal to Dean as he gave her the opportunity to work under him as his personal assistant and then as CEO. She considers Dean somewhat of a mentor and father figure (often stating she has "daddy issues"), sometimes dressing up in outfits that resemble his typical suit. Dean has mutual respect for Cassie and has asserted multiple times that she is the best possible person for the CEO positions.

Cassie is very loyal to Otto but understands he has an unhinged nature. Otto originally promoted her to CEO so she could be a possible scapegoat if the Casino came under legal scrutiny, but over time both him and Dean have given Cassie increased freedom to run their businesses as she sees fit.

Before her promotion Cassie worked alongside Marlo on the groundfloor of the casino and as a result the two became very close friends. Cassie will often confide in Marlo about family issues with the Angels or vent about general business stress.

Gomer is Floor Manager of the Casino and another person Cassie considers part of her Casino family. She affectionately refers to him as "Gomey".

Jean "X" Paul works in the Marketing Department of both Burger Shot and the Casino and Cassie will often query him for marketing related ideas or task him with executing dangerous PR stunts. However, Jean frequently tries to dupe her into helping him in his criminal activities without her knowledge. Jean has successfully tricked her into unintentionally helping at a house robbery, helping him escape the police after his first successful bank heist, and help fund his pilot's license. Regardless, Cassie still considers him a valued employee.

Hutch is Cassie's personal assistant. Cassie was initially hesitant about making him her assistant, but the job has made them close friends with a similar tendency towards hyperactivity. Hutch has introduced her to the racing scene through passenger ridealongs and in turn Cassie has brought him further into the Casino family, with him even offering his own business ideas to Dean and Otto.

Shelly is the Assistant to the General Manager at Burger Shot. Cassie promoted Shelly to the position after she demonstrated her commitment to the restaurant, but Cassie has since tasked Shelly with growing a backbone so she can properly handle the daily antics of her General Manager Robert Spowylamywanowski and the chaos of her shift.

Cassie is an investor in V's business Blazing Tattoo and considers him a close friend.

Cassie is an investor in Saab's business Saab Motors. They regularly argue over contracts with neither party willing to negotiate, but outside of business they will frequently flirt with one another and were once caught by fellow Angels Aleksander Sazkaljovich trying to have sex in the Casino bathroom. They have also proposed to each other on multiple occasions, hoping to capitalise on marriage tax benefits.. 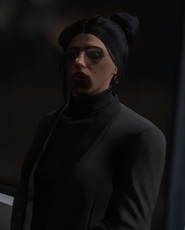 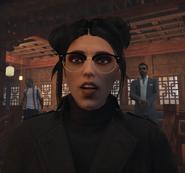 Cassie at the Rooster's Rest. 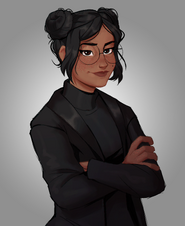 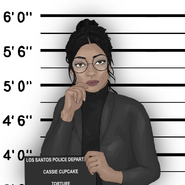 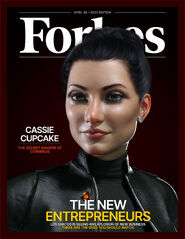 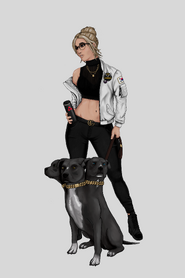 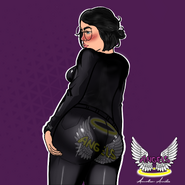