Candy Floss is a character role-played by Aquila Plume.

Candy Floss moved to Los Santos, still with unresolved issues between her and her mother. The previous year her mother, Cynthia, had bought Candy a new Maibatsu Sanchez, model GP-450, and she'd almost killed herself on her first night driving it. It left her with a scar at the back of her head. Though not visible to anyone, feeling the bump at the nape of her neck will always remind her of her constant defiance when it comes to her mother. She feels remorse and guilt for her mother's failing health, often feeling the need to fly back to Canada to look after her.

Upon arriving to Loss Santos, the first thing she did was take out her Sanchez from the parking lot and explore the city. She made a few friends along the way and quickly found the crazy world of Burger Shot and Dean's World.

Candy is an extremely flirtatious girl and so far, it has landed her into a few predicaments. Having non-boyfriends and fake husbands will probably not be the only type of sticky situations she'll find herself in.

She obviously loves pink, maybe a little too much and likes to use candy names as terms of endearment. For example if she likes you, she may call you sweety, sugar, honey or jelly bean. If she really likes you she'll probably call you gummy bear.

Laughter is a natural reaction and a coping mechanism for her. She'll laugh just as hard at a joke than she will at getting ejected off her bike. It all depends on the acrobatics performed while being ejected.

She's a bit of a daredevil and is always on the lookout for some cool jumps, though she does have a brain in that head of hers, (most of the time) and would rather make those jumps with supervision in case she gets severely injured. She's had 88 bone fractures in her life so far and counting.

Maibatsu Sanchez, model GP-450 her first child and it won't be the last bike she owns. 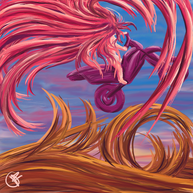 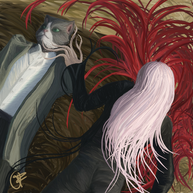 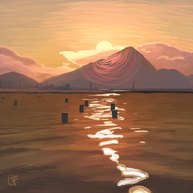 "Halo" - Sunset at the Old Pier - by Candy Floss - 2021-05-27
Community content is available under CC-BY-SA unless otherwise noted.
Advertisement