Buck Stanton is a Judge and the former Assistant Chief Justice for the Department of Justice. Known for his stylish clothing and chill attitude, he is well received by the city. He is often located on the courthouse steps overlooking the city. He also enjoys hanging out at the police station speaking to cops.

The People Vs. Jordan Steele

Judge Stanton presided over the criminal case of The People vs. Jordan Steele. He found Officer Steele guilty on all counts including reckless endangerment and felony hit and run and initially sentenced him to 10 months in prison. However, after speaking with attorney Kevin McLoughlin and police officers, he agreed to suspend the sentence. Jordan was instead sentenced to driving school with Tessa Lamb, supervised therapy, and ride-alongs with senior officers. 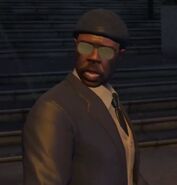 Buck as drawn by Danny Doodle.
Community content is available under CC-BY-SA unless otherwise noted.
Advertisement