Buck Colton is a character role-played by CinnamonToastKen.

On July 31st Buck washed up on shore alive and confused as to what had happened. He had vague memories of who he was and who he knew were friends. 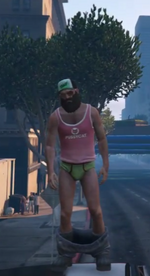 Buck stands atop a truck