Bubbles Smith is a character role-played by RileyRP.

Bubbles is from Limbourg, Belgium. He is the youngest in his family. Bubbles maintains a somewhat-reserved demeanour to look good on camera. As the series progresses, he reveals many sides to his personality.

Bubbles' full name is never revealed, and he is simply referred to by hospitals, courts, and other officials as Bubbles A. Smith. He is known for his hoarse Maritimer English, sensitive nature, pearl snap shirts, and thick glasses that magnify his eyes to a considerable degree. Bubbles has never been seen without his glasses, even while sleeping, and in photographs of him as a child.

In the past Bubbles reveals that he may be legally blind, as he cannot see how many fingers are held up directly before his face by a truck-driving instructor who admonishes him for not being able to see "jack shit".

Bubbles often acts as the Boys' conscience and tries to be the voice of reason during their misadventures. He is intelligent and has a larger general knowledge than most of the other residents, displaying knowledge of Greek philosophy, classical literature, as well as a strong interest in spaceflight and rocket science. Bubbles regularly chastises Julian and Ricky for being "drunk and on drugs," although he also occasionally consumes marijuana and alcohol (the latter usually when he is depressed). Bubbles gets upset whenever Ricky and Julian fight and he is often forced to act as a peacemaker between the two, because of this he often finds himself torn between friends during large conflicts and this has not changed sense he has entered the city. He also believes in (and harbors a fear of) Sasquatches (which he calls "samsquantches") and will not hesitate in telling his version of when he saw one.

When he was age 6, Bubbles' parents fled the trailer park to escape debt collectors and he was placed with Julian's grandmother until he came of age. Bubbles lived in a tool shed with his numerous cats. At one point Bubbs rescued a mountain lion he named Steve French, the lion had somehow got lost in the urban farming lands of Nova Scotia and had taken refuge at the boys weed farm. After helping himself to as much critters and pot as he could handle over the course of a month, Bubbles, Ricky and Julian discovered him and were understandably upset by the profits lost to the lion's appetite. Bubbles was able to convice to boys to keep the lion and he was then named Steve French. Bubbles attempted to wean Steve off of the "Pot" by feeding him fajitas laced with weed, but Steve eventually escaped his captivity and roamed the park. Steve was spotted by a few residents and animal control was promptly alerted, but not before the lion somehow got ahold of some cheese burgers laced with viagra and sexually violated the trailor park supervisor and his assistant.

At the beginning of his adult ship, he makes his living by salvaging shopping carts, repairing them, and selling them back to stores. In later seasons, he attempts to start various legitimate enterprises, which are always promptly usurped by the Boys as fronts for illegal operations and ultimately destroyed. Despite this, he is usually willing to partake in the Boys' various get-rich-quick schemes with only mild objections, because he considers Ricky and Julian to be his only family other than his "kitties." While Bubbles isn't always spared the consequences for their activities, he usually is able to escape jail time because Ricky and Julian often cover up his involvement in their schemes when facing arrest. However, Bubbles hasn't seen the boys in approximately 4 years and still has no idea what has happened to them. 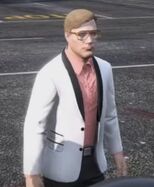 Bubbles was recruited to run Paparatto's Deli at Dean World by Tomassi Paparatto. With time and due to his spectacular business success he was admitted to the ZooMafia Family, where he served primarily as their 'clean guy' and was also charged with managing the Family's financials. In 2022 Tomassi was Deported from Los Santos and ZooMafia underwent significant changes including rebranding to Royal Mafia. Bubbles retained a high ranking 'OG' status but decided to delve deeper into the life of Crime. He currently serves in high command on the OG Royal Mafia Council.

The Green Bastard is a wrestling persona created by Bubbles back in his days at the park, he often personifies Green Bastard when he is feeling "frisky" and is willing to fight just about anyone for the sake of violence.

Conkey was the name of a hand puppet that Bubbles used to own and frequently use until Ricky and Julian had to confiscate him in grade 6 due to Conky's personality overpowering Bubbles own. Conky was later recovered from a nearby swamp when Bubbles required an emotional outlet during a rather bad tooth infection he had as an adult, only for Conky to later have his head shot off by Julian after comparing him to Patrick Swayzie. Conky returned once again after Bubbles rebuilt him during another scheme cooked up by Rick and Jules, only for him to rat the boys out to the authorites. Bubbles got so frustrated by this act of betrayal, he drowns Conky in a nearby river while Ricky cheered him on from nearby.

By this point, it was well established that Conky was an extended part of Bubbles personality that would frequently resort to pestering those nearby and mucking up plans, though it is never explained what Conky's endgoal is by causing so much chaos within Bubbles inner circle. After the sudden disappearance of Ricky and Julian, Bubbles moved to Los Santos and without anyone to keep Bubbs in check..his inner Conky finally came out, even without the puppet.

Richard and Bubbles started out as acquaintances that met through a mutual friend named Omar. Richard and Bubbles hungout for a few days until Richard found a new crew to roll around with. Bubbles and Omar showed animosity towards the whole situation and decided to hold a slight grudge against Richard for abandoning friends so easily.

Bubbles invited Richard to hangout after Richard ended his shift working as a taxi driver one day, which ended in both of them being taken hostage for a pacific bank robbery. After the robbery, Bubbles decided he has had enough of Richard's shit and bludgeoned him with crow bar. After a hospital trip and Bubbles buying his first pet (a gold fish named "Orangey"), Bubbles took Richard to a railroad crossing bridge and threatened to throw him off. While dangling Richard over the edge, Richard exclaimed the fact that he had killed one of Bubble's kitties the same way by "accidentally" dropping him. In a rage, Bubbles had come up with a scheme to take Richard to the dam and drop him from there to be chewed by the turbines but unfortunately Richard survived the fall into the water and wound up chasing Bubbles and shooting him twice. Bubbles has yet to take care of the business with Richard Woytikw...