Best Driver in the PD

Silver
Brittany Angel is a character role-played by kyliebitkin.

Brittany Angel is a Sergeant for the LSPD, Badge #457.

Angel is a 29-year-old female; she has white hair, usually pulled into a ponytail or high bun. While some assume the white hair is either dyed, or caused pre-maturely from a stressful event, the hair color is all natural from birth. She is self-described as "having an amazing butt and bobs". Her sexuality is a bit undefined; she has shown attraction and had romantic relations with both men and women.

Angel is a little short-tempered, and can lose her cool in a situation, but quickly recovers to maintain a professional appearance afterwards. She doesn't joke around in active situations very often, and is known throughout the criminal world for her cold efficiency in enforcing the law; using whatever means she can to apprehend criminals.

Angel can be lenient on those who are honest to her, but if she finds out they lied, she will almost always throw the book at them. Following a situation where she killed a homeless man in the line of duty in Liberty City, she has an obsession with helping homeless people, and getting them off the street.

She spends most of her free time drawing sketches that she hides away, and cooking. She enjoys playing video games, has a strong interest in metal music, and muscle cars.

Brittany Angel was born and raised in Liberty City by her two parents, Jerry and Mary Angel, who are both still alive and well. As a child, she took a strong interest in drawing, but never pursued it due to feeling self-conscious about her abilities.

As an adult, she joined the Liberty City Police Department, and worked with the department for three years in the Algonquin precinct. While on the beat one day, she responded to a call about a woman being attacked. When she arrived on the scene, she found a homeless man standing over the body of a woman, with a broken bottle in his hand. Angel raised her weapon and ordered the man to drop the weapon and surrender. Suddenly, the man rushed at her, and she was forced to gun him down. This was her first time shooting someone, and it fundamentally changed her.

After those three years on the LCPD, she grew tired of being constantly shot at by dangerous criminals, and chasing people through the streets with low pay rate. Angel heard that Los Santos was paying better, with lower crime rates. Hearing this information, she made the decision to move from Liberty City to Los Santos for something a little less dangerous.

LSPD Officer Kyle Pred and Angel are "just friends, BTW". While they take showers together, give each other oil massages, and had an HR meeting to maintain professionalism on the clock; Angel would like everyone to know that they're "Just Friends BTW". Angel and Pred have a house together on Whispymound Drive 6. After acquiring the mansion, Angel acknowledged that Pred is her boyfriend. She also started to call Kyle her husband after Chief Justice LaBarre pronounced Pred and Angel Common Law married. Recently, Pred has given her an "engaged-to-be-engaged" ring.

As of January 3rd, 2020 Pred and Angel are on a break as a result of him attempting to dress her up like Lydia Zephyr.

Though they may banter back and forth regularly, they actually are great friends. They occasionally joke that they used to be married, but this is untrue. This was clarified to be a joke when Mia Mersion questioned the two of them about their actual relationship.

After being in Los Santos for a while, people started remarking to Angel that she looked strikingly similar to former District Attorney Adrienne West. After meeting with West, they agreed that they looked nearly identical. Believing that it couldn't just be a coincidence, the two agreed to DNA testing at Pillbox Medical Center. After waiting a couple of weeks for the results, the hospital confirmed that West and Angel were sisters, possibly twins. This revelation was a complete surprise to both women, each believing they were only children. The mystery behind why they were separated as children has not yet come to light, as neither has had a chance to confront their respective parents about it.

Angel's ex-girlfriend, she started doing "arts & crafts" with Lily prior to their breakup. 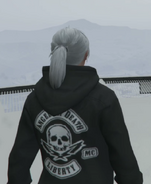 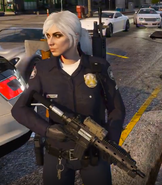 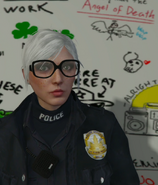 Retrieved from "https://nopixel.fandom.com/wiki/Brittany_Angel?oldid=32964"
Community content is available under CC-BY-SA unless otherwise noted.