Brian Knight is a character role-played by dasMEHDI.

Brian Knight is a Lieutenant for the Los Santos Police Department, Badge #495.

Although he is known to get into some shenanigans, Brian is a highly skilled and effective officer.

Brian is really addicted to burgies. Despite Brittany Angel's warning to "not eat several burgies on shift (especially not the "Heart Stopper"), to prevent artery-clogging"; he continues to devour up to 4 burgies at once. Brian will go as far as to yoink them from criminal's pockets while they are being held in their jail cell and run to eat them while out of view of his superior.

Several times after being caught eating burgies, Angel has punished him. The punishment is usually in the form of making Brian run at least 3 full laps around MRPD - always resulting in vomiting, and immediate regret.

Ever since high school, Brain Knight has wanted to be a cop. Growing up in a little town just outside Boston, Massachusetts, those in Brian’s family all occupied a position in the police force. A first attempt to join as a youngster failed, as he was deemed “unfit” following his interview. An opportunity to become a mall cop on the late-night shift presented itself. and Brian took it.

A note arrived in the mail; Brian’s Uncle was in the hospital, and not doing well. He wrote to Brian to "be himself, and to not give up." Before Brian made it to his Uncle's bedside, his Uncle passed.

With renewed passion, Brian once again had the strive to be what he once dreamed of: an officer of the law. In pursuit of his passion, he relocated to a new city – Los Santos.[1] 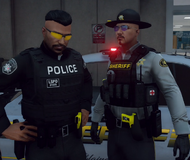