Blonde
Brian Barnes is a character role-played by GreenDragon917.

Brian Barnes is a Resident with Pillbox Medical Center. A pretty stoic person, Barnes has a unique focus on his duties. Retired from EMS, he still has many friends in the field. He has chosen to get out of EMS due to his disdain for departmental politics.

Brian was born in Vice City, Florida to an accountant and the bosun of an oil tanker. He volunteered with the Vice City Fire Department during his senior year of high school and into college. He attended the University of Vice City where he graduated with his Bachelor's of Science in Nursing. He was then commissioned into the Coast Guard as a part of the Coast Guard College Student Pre-commissioning Initiative. He served his first 2 years in the USCG as a Health Services Technician before "A school" and becoming an Aviation Survival Technician. He served as an Aviation Survival Technician out of CGAS Vice City for the remaining 8 years of his Coast Guard career. He then moved to Los Santos and joined Los Santos EMS. After a year and a half of working with Los Santos EMS, he decided to go back to college and get his MD. He was hired to be a physician with Pillbox Medical Center by Choi Zhangsun. On December 16, 2020, after leading an intense surgery to save Choi's life and leg after she was stabbed by Jasper Saxon, Barnes was cleared for solo duty by Dougie Howzer.

Barnes met Ducksworth at his EMS interview where Ducksworth led the panel. Ducky became Barnes's friend and mentor during his trainee phase. During this time, Ducksworth gave him the nickname "booter" which referred to his relative inexperience with Los Santos EMS. Prior to his departure from EMS, Ducksworth recommended Barnes for promotion to EMT. After Ducksworth became a doctor, Barnes continued to work closely with him. Barnes has always seen Ducksworth as a role model and a brother-like figure.

Barnes met Dr. Zhangsun very early on in his EMS career. Upon their first meeting, Choi punched Barnes in the face. Despite this, Barnes and Choi quickly became friends. Although they constantly tease each other, Barnes sees Choi as one of his best friends. Barnes continues to see Choi as a sister figure, and is fiercely protective of her. He particularly enjoys annoying Dr. Choi now that she is his supervisor. When he had his mustache, Choi referred to him as "what would happen if Kael Soze had sex with a tennis ball" during his interview for medical school.

Barnes quickly connected with Lei after she was hired due to her similar background within the fire and EMS service. He jokingly passed his nickname of "booter" to Lei, which he often ribs her about. He also doesn't know how to actually pronounce her name, so he, like many of his EMS brothers and sisters, refers to her as "Lasagna".

Barnes and Tsury were part of the same medical school class. Throughout their residencies, they have become friends. Barnes has an immense respect for Dr. Nanakaze's skill as a surgeon. Dr. Nanakaze helped Barnes learn to perform his first autopsy prior to becoming a solo resident.

Barnes often works under Dr. Howzer in his duties as a resident. He sees Dr. Howzer as one of the best doctors he has ever known. He respects Dr. Howzer's opinion and heeds his advice carefully. 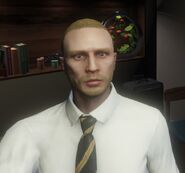 Brian without his lab coat 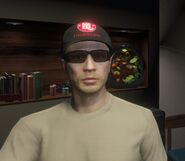 Brian in his scrubs
Add a photo to this gallery
Retrieved from "https://nopixel.fandom.com/wiki/Brian_Barnes?oldid=79019"
Community content is available under CC-BY-SA unless otherwise noted.